Foundation Baleària opens this weekend two exhibitions in two of its Culture Llonges: one by the renowned Valencian artist Rafael Armengol, at Els Magazinos in Dénia, and the group show Baleàrics Musics at the Torre dels Ducs de Medinaceli in El Verger.

On the one hand, Armengol presents his exhibition Bodegons. This brings together 22 paintings and 4 engravings, among which the series stand out: Coliflors, Tomaques, Magranes and Cotán. It is the second time that the artist exhibits individually in the city and can be visited from next Friday, July 31, the day the inauguration will take place at 19.00:31 p.m., until August XNUMX.

It should be remembered that Armengol is one of the most recognized painters in the Valencian territory. With more than 50 years of experience, he has obtained important awards, such as the Alfons Roig award or the appointment of Academician of the Royal Academy of Fine Arts of Saint Charles From Valencia; His work is present in important public and private collections in Spain and abroad. 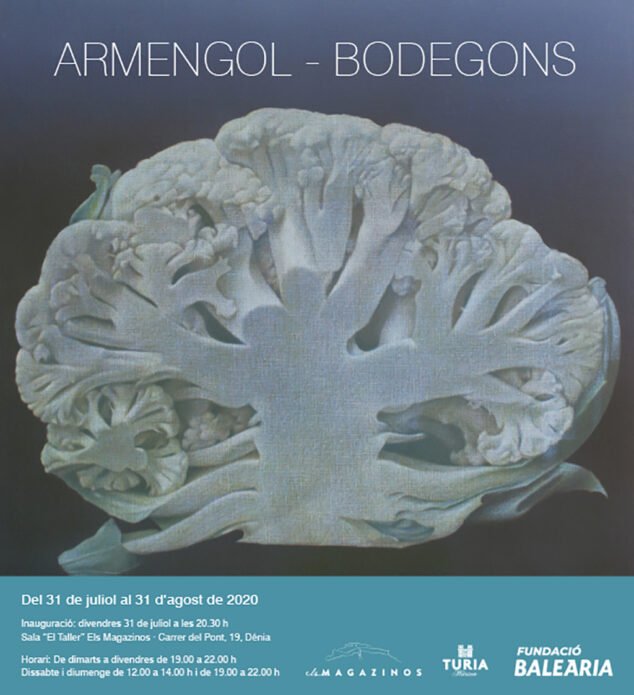 Poster for the Rafael Armengol exhibition in Dénia

On the other hand, and with regard to Baleàrics Músics, which is exhibited in El Verger, it is made up of works by 15 Mediterranean artists: the Valencians Juan Caravaca, Alexandra Castillo and Hans Dieter Zingraff; the Balearic Islands Tomeu Coll, Pilar Cerdà, Pep Coll, Diana Bustamante, Zulema Bagur, Fèlix Coll, José Manuel Menéndez Rojas, Toni Planells and Doralice Souza; and Algerians Saïd Debladji and Mahmois Taleb. It will be on Saturday, August 1 at 20.30:XNUMX p.m. at the Torre dels Ducs de Medinaceli in El Verger.

It should be remembered that this sample is the second in the Baleàrics series, organized by the shipping company together with the Government of the Balearic Islands, and which has visited the other rooms managed by the Foundation: Benissa, Pedreguer, Pego, Dénia and even Oran (in Algeria ). After passing through El Verger, she will travel to the Balearic Islands, and will be exposed on the four islands of the archipelago.

In both openings, security measures will be maintained: the mask is mandatory, the capacity is limited to ensure the distance between attendees and hydroalcoholic gel will be dispensed.

36.640
4.282
11.046
2.130
We use cookies necessary for navigation and traffic analysis. We do not use cookies that provide us with personal data or advertising cookies.
More optionsACCEPT
Manage consents