Tardor, the Dianense artist who has created in Germany an 3D mural as conflictive as it is imposing

Tardor Roselló is a young man from Dénia who, although his name may not sound like him, his works are already part of the day-to-day life of the city. And not only that, but he has decorated with his art the most emblematic points of several towns in the region, as well as Madrid and other cities. 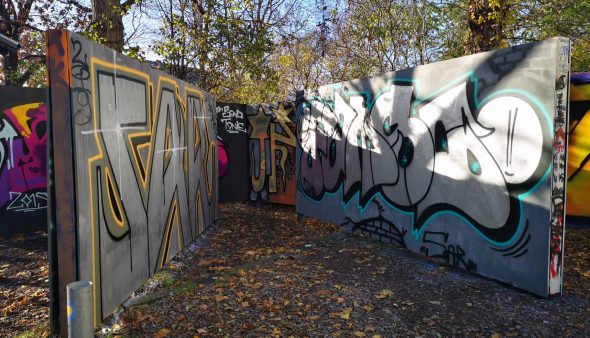 The before the work of Tardor

This time he has faced a new challenge, the elaboration of an impressive mural in which, with 3D effect, sought to make visible the problem of fascist growth in the area of ​​Dresden, Germany. A goal not easy when you work in the street, in view of anyone who passes through the place, and, for more inri, being a foreigner.

We talked to the artist to tell us who he is and how he lived his experience in Dresden.

Since when do you dedicate yourself to graffiti and why did you start to be interested in this discipline?

My first graffiti was with 16 years, in the 2013, but for a long time I had interest in drawing and, in general, in Hip hop culture, since I was very influenced by rap music. Finally, I decided to pass those "scribbles" that I made in a folio to a wall.

What struck me most was the format and freedom it offers. With the years and the practice I was improving and having more interest in the muralism, where not only the drawing mattered, but the interaction that it has with the space. 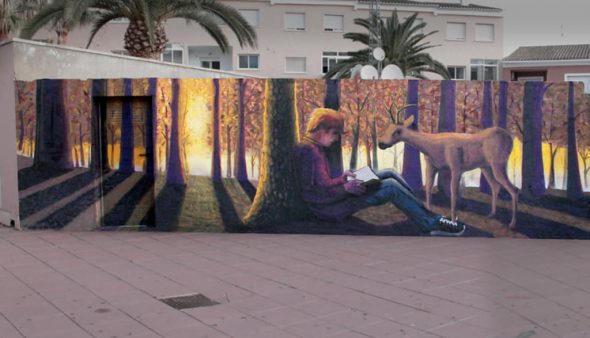 Where have we been able to see your works?

I have painted enough for Dénia and the surrounding villages. In Dénia I have been able to participate in all the editions of Urbajove, the urban art contest, and my works can be found in La Vía street along with those of other artists, as well as behind the tunnel of the Castle and in Torrecremada. Also in other type enclosures in businesses or private houses of the city, with murals or work of study (pictures).

This in Dénia, in La Xara I made a mural in the Plaza del Garrofer a few months ago, and years ago in the Plaza del Cinema. In Jesús Pobre I have one of my favorite murals, which is located in the Plaza Rosa. I also have some works in Benigembla, where they have treated me as a fable in both editions of the BIMAU festival. 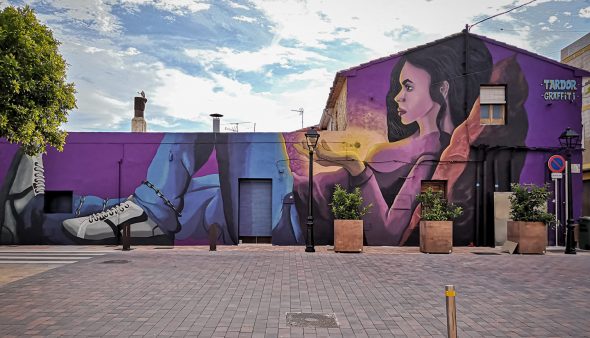 In addition, I have quite a few murals in different neighborhoods of Madrid, which is where I am living right now, but I am constantly traveling to paint in different towns and places, such as Galicia, León and now, recently, in Dresden (Germany).

Why did you decide to make that mural in Dresden?

I made this mural between the 21 and November 22, taking advantage of a trip to Berlin to do a job with a friend. A photographer friend told us about doing a project in the city where she was living (Dresden). Being a social work and with freedom of expression we liked the idea. 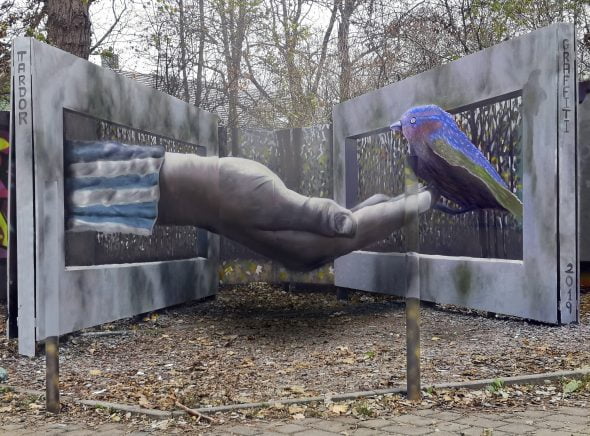 We were told by the socio-political situation of the city, the organizers of the event and all the inconveniences they have had because they were immigrants. Also, researching on the internet, I saw the problematic growth of the fascist movement in the place, and I was clear that I wanted to reflect on my wall the problem that the city was going through.

How was the reception of the mural by the residents of Dresden?

I have to say that it is not one of the places where they have treated me best when painting. When you paint on the street you are exposed to all the opinions of everyone who passes through it, which at the same time is the beauty of this profession. These things do not happen within a study, but not many others that are great.

In this case we had some neighbors who did not like the initiative too much. I felt in the environment and even received a threat from one of them, but that is what I said before, in the end a lot of people pass while you are painting. It is a museum with open doors and you will not like them all. I also have to say that some neighbors who had nothing to do with the event gave us many things.

Tell me about the technique. How do you get that 3D effect?

This 3D effect is seen from a previously chosen point of view and from this point it seems that the image comes out of the wall. It is made in this case with 2 side walls and a piece of wall that is further away.

Is it first that you do this way?

Some works for individuals, the December 14 I have an exhibition of urban art in Madrid and some other project in other cities. You can see all the work I am doing, and this one in Germany, in my profile, Tardor Graffiti, on Instagram y on Facebook.