The election campaign is over, again, and Sunday is voting ... again. Therefore, the political formations have returned to the streets to make their second campaign for the generals so far this year. 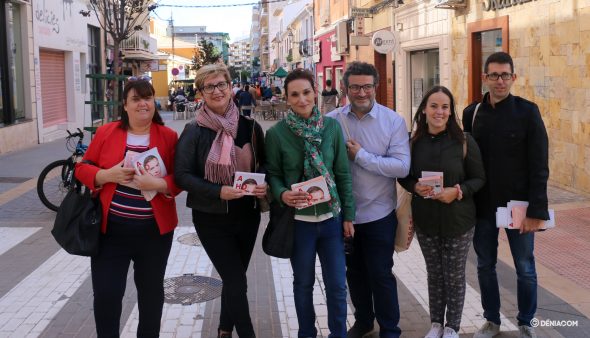 Candidates for Alicante with municipal representatives of the PSPV

There are few hours left before it ends with the day of reflection, so, taking advantage of the fact that it coincides with the vegetable and fruit market on Magallanes Street, where, as every Friday, there is a large influx of neighbors, the Socialists of Dénia they have accompanied Yolanda Seva, number 4 of the list by Alicante to the Congress, and Ana Martínez, candidate to the Senate, to distribute leaflets among those present.

Seva has also attended the media, reporting on Pedro Sánchez's program with which he presents himself to this unusually short campaign. "It is above all a campaign for social rights, employment, ecology, education and, above all, a campaign raising awareness that we should fight to have that stable government. That government that we should have had from April 28 since the PSOE was the most voted party, with 123 deputies, bending to the second political force in the Spanish state.And to try that from November 12 we have a progressive government with a loose majority that allows us to apply the policies that we had begun to develop in the 10 months of government ", says the candidate.

In addition, he has launched a poisoned dart at the Popular, accusing them of allegedly carrying out a dirty campaign on social networks to demobilize the vote on the left. He has also criticized the far-right party VOX, which the latest polls place as third force. "Hopefully the 10N will go out to vote, because we have to be aware that the April 28 the extreme right was a threat and today is a reality. And that reality cannot rise nor can it participate in democratic institutions giving homophobic, xenophobic and that don't take us anywhere in this country "stresses Seva.

Hand out an angry electorate

The candidates of the PSOE by Alicante have admitted that they work against an angry and tired citizenship of so many electoral calls. However, they hide in that their party is also a victim of this, calling it "illogical" that winning with 123 deputies have to return to attend this scenario. "And here we are for not agreeing with independence, for not yielding to political blackmail of other formations, and for the irresponsibility of right-wing parties that have not abstained to form a stable government in this country", declares Yolanda Seva.