Compromís opinion: «Regarding the motion to claim the payment to Aprosdeco, and the despotism of Grimalt to the plenary»

In the first place, and since we are here at our turn of intervention during the approval of the motion, we express our total gratitude to the Aprosdeco association and share our indignation at a delay in the administration that affects People who work to improve the lives of others, and they seem unjust and intolerable. Per això, among other things, we are going to donate support to the voter motion YES, because I consider it necessary that the Department pay the deute amb Aprosdeco payment and that the workers can collect. 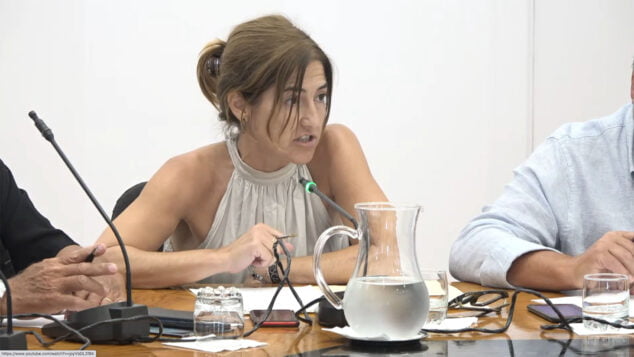 Intervention of Eva Ronda, councilor of Compromís, during the plenary session of Dénia

For us, the first is the people, I tell them, and not the partisan interests. Per això insistim that we are not branchists. If any questió s'ha d'exigir los nostres, es fa, y en aquest cas així ho hem fet, no remnants of arms encreuats defensent excuses and promises incomplides dels nostres partits a València o a Madrid, com si fan altres. I could pose infinite d'exemples.

It is for this reason that in assuring us of the situation, they will contact the director of the protesting association for our support and offer the help you need; there with little després with the general director of the Conselleria, Enric Juan, and with the one who is, from now on, the new consellera d'Igualtat i Politiques Inclusives, Aitana Mas. The first thing that we are going to be able to know is that the situation is caused by lack of contract, a contract that they already have and is in the process of being formalized, but the absence of which is what has caused the bureaucratic delays, so much so with l'any passat. I also comment that, of the 5 pending invoices, 3 are embossed in Intervenció (Conselleria d'Hisenda i Model Econòmic, managed by socialist partners).

However, we cannot excuse the delay, since the management has not followed the best circumstances for some reasons. But it is that among these reasons, there is also the management of the socialist materials, responsibility that they do not anomaly in said motion, nor in the press, nor will they assume there. No saltres no mirem cap altre costat, com si fa el PSOE quan l'interessa, and yes we know fer self-criticism and claim als nostres the one who pertains.

According to him, I am sorry to donate support to the motion, we will not initially join the board of carriers for two reasons: The first, because this motion is going to present the government that presumes to be "the most participatory in history" one day away from plenary sense try to reach consensus, talk or share information both Compromís, and both of us would agree on something we could say or contribute. And the second reason, because the motion of the party that governs Dénia and the Generalitat, surprisingly requests an urgent meeting with the new minister through a motion.

De veritat volen fer-nos creure a tots i totes that the mayor needs a motion, with all the bureaucracy that it entails, to demand an appointment with the minister? Is it that he does not have authority, or prou institutional power and contact enough per a fer-ho by the way that he always fa amb all the ministers, cridant per telèfon, or with a minimum sol·citar-us to nosaltres that ho gestionem? There we have the main reason for which we are going to bequeath here that this is a motion created by the socialists with the sole objective of fer sang and politics against Compromises. Beef more

After all the talks and in the plenary session, the mayor answers, as usual, both forms of evil, telling us to blame others and that we are a political al·legat. He believes the thief that all are of his condition. Ens diu també, amb molt mal gust que: “mentre estem cantant, fent festes i ballant” ells treballen... Yes, but I must have worked in the campaign of the Pla Edificant, the Pla Convivint, of the aids and subsidies for the COVID, the occupation, the Comerç, the Mercat, and the majority of millions of whom have benefited from this government team and Dénia thanks to the Compromís al Botànic policies. I per to finish, quan sol·licitem un segon torn de paraula legítim per to answer-li, l'alcalde ens denies eixe dret democràtic estab- lished in the ROM (Reglament Orgànic Municipal), saying: “Per a què!”. There we have the usual despotism with which the absolute majority of the PSOE of Dénia works. Eixe és l'estil, senyors i senyores, I went to the plenary sessions to watch, because in the social forums I didn't see.

Per damunt de tot, defendm that Aprosdeco collects, that it collects as much as possible, and that this situation is not repetitive anymore. In breu tindrem met her with the nova consellera, who will learn to possess just then, and will not be thanks to this motion. We will demand, criticize and claim what is missing from the association that has been working for social welfare for many years. But the one who doesn't can Deixar de fer is denouncing the superbia and hypocrisy that will begin in 2019 and that we will be living with intensity during the entire campaign that has already started.

Aitana Mas, vice president of the Generalitat, renders accounts to the residents of Dénia
18 January 2023
1 Comment