Ondara announced the programming of the 24ª edition of the Festacarrer 2019, which is organized by the City Council of this town. Like last year, this event will last three days: On Friday 20, Saturday 21 and Sunday 22 on September of 2019, in which there will be endless activities and performances related to the Valencian popular culture.

The presentation was attended by the Mayor of Ondara, José Ramiro; the Councilor for Culture, Raquel Mengual; the Councilor for Heritage, Raquel López; the representative of Ondara in the Technical Committee of Pilota Grossa, Toni Albert Crespo and the teacher Josep Alemany (D'Ondara Colla de Dolçaines i Tabals).

The Festacarrer Ondara 2019 will feature the colorful performance of the Muixeranga de la Plana and the Muixeranga de la Marina in the bullring and with the 3rd Dolçaines and Tabals Exchange Vila de Ondara with the participation “D'Ondara Colla de Dolçaines and tabals”; the Ondara Musical Union (metal and percussion section); the Associació Sifasol de Benissa (rhythm and voice section) and the Colla de dolçaines i Tabals de Algemesí. 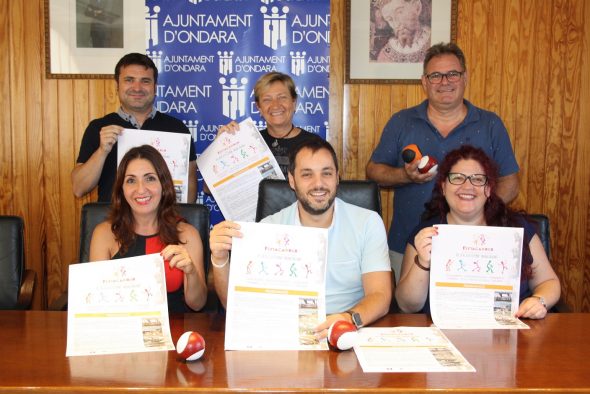 Presentation of the Festacarrer de Ondara 2019

In addition, the concerts of "La Colla del Cànter" and "Notes Soltes" will be offered; there will be a workshop of popular dances and popular dansà with the Grup de Danses Ocell; as well as itinerant theater, presentation of Pilota Grossa's book and semifinals of the regional championship of this modality of native sport (new this year); guided tour of the historic center, “cabasset” dinners, performances; and the third prize of composition for dolçaina and piano “Festacarrer d'Ondara”, among other events, which will culminate with the concert “A toc de vermut” III Intercanvi de
Dolçaines and tabals Vila d'Ondara.

Ramiro expressed his satisfaction "For the effort made to recover the essence of Valencian culture in Ondara", detailing that in the Festacarrer de Ondara 2019 culture, tradition, music, dolçaina, dances and pilots intermingle as a novelty. Ramiro thanked all the collaborators who have made possible the celebration of this great event and invited all citizens to participate that weekend, ensuring that “The offer of the Festacarrer is nourished and of high quality”. 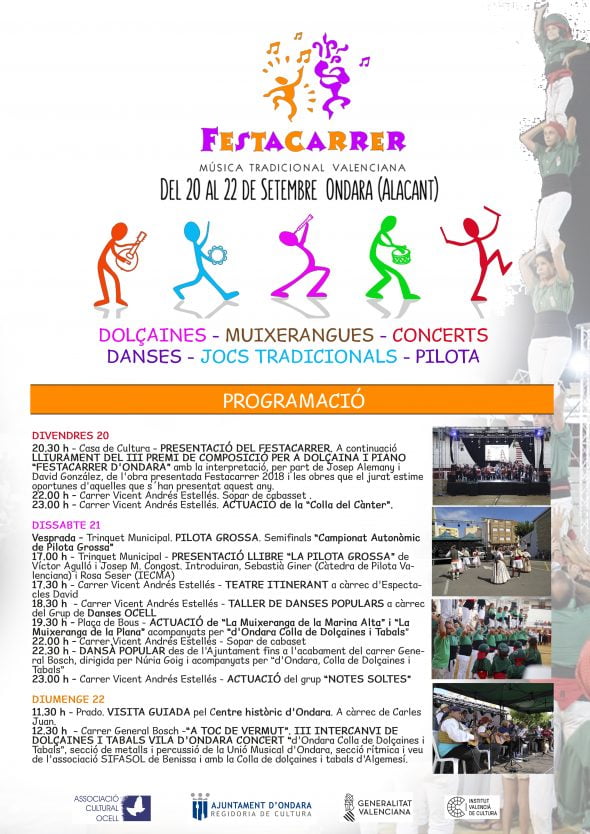 The Councilor for Culture, Raquel Mengual, stressed that it is a very complete program, which continues with the path started to promote this party and not be lost. For its part, the Councilor for Heritage, Raquel López, explained that one of the events framed in the program will be the guided visit to heritage architectural elements of the historic center.

Josep Alemany (D'Ondara Colla de Dolçaines i Tabals), as representative and jury of the Festacarrer Composition Award of Ondara 2019 revealed the name of the winning work in this third edition, and of the two honorable mentions, proceeding to open the minutes Today at the press conference.

The prize, endowed with 1.000 euros, goes to the composition "Val i Trenta" by David Posteguillo Moscardó de Manuel
(Valencia). The first mention is for “Entelèquia”, by David Valera Ruiz de Petrer (winner of the 2018 Prize). And the second honorable mention is for “Àngels i Dimonis” by Miguel A. Ibiza Zaragoza, of Pedreguer.

The Festacarrer de Ondara has this year the novelty of Pilota Grossa. The representative of Ondara in the Technical Committee of Pilota Grossa, Toni Albert Crespo, explained that, as a novelty, on Saturday, September 22 will be played at the Municipal Trinquet of Ondara the semifinals of the second Autonomous Pilot Championship Grossa. Also I know
present the book “La Pilota Grossa” Víctor Agulló and Josep M. Congost, published by IECMA and Edicions96; A study on this game mode.