The football field "Diego Mena" hosts tonight at 20 pm, the football league match, belonging to the eleventh day in Group VI of the Third Division, between Dénia and Castellón. Party to be directed by the referee, Zornoa Parres, of the Valencian school.

The Navy team imperatively needed victory as it comes to harvest two defeats in the last two games he has played. Although the template is quiet, everyone wants to break the losing streak.

The duel is presented extremely even if we go by statistics showing both formations. Both teams have 13 points in the standings.

Castellonenses much lower performance when playing as visitors. They have failed to win in any field who have visited. Borriol (1-1), Burriana (2-2) and Crevillente (0-0). Technical, Fernández Cuesta surely will try to surprise the Dianense whole.

Recovery of the brain, GervasioIt is essential for this meeting. For doubt is whether Dianense coach is able to withstand the 90 minutes. This man is vital for the orderly Dénia game and for the plays of strategy

Among the leaders dianenses there is concern as to what fans response will be given the time of the meeting and the temperature can do.

Coach Paco Cuenca can start out with the following eleven; Nico in goal, a defense composed; Escobar, Alex, Baixauli and Garrido. In the midfield; Gervasio, Victor, Carlos Ribes and Dani García and in attack; Cristian and Roberto. 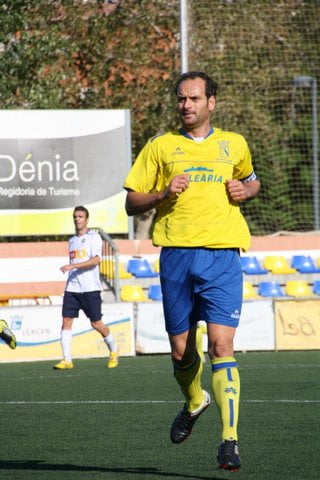 Gervasio, the great doubt for the coach, Paco Cuenca.