Again, the cetaceans stroll along the Dianense coast. Yesterday afternoon, on the 17: 30, a group of 4 appeared, presumably, rorcuales that were walking between Les Deveses and Els Molins. That same day they could also see copies in Les Rotes, as seen in the video, although we do not know if it is the same. 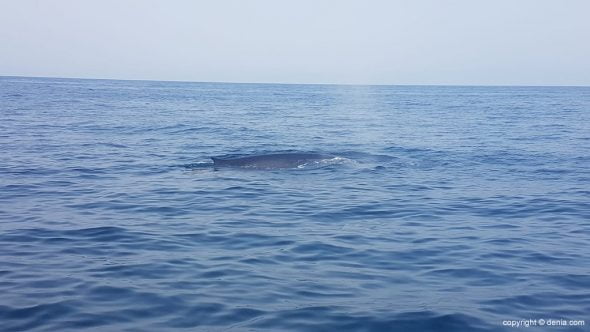 As happened earlier this week and that here we have, a group of whales come back very close to our beaches. It is unknown if it is the same group that has been left to spend a few days in Dénia, but this time the witnesses say that its size reached in one copy the 16 meters.

They have been seen in two very different points of the Dianense coast. First, we received information and images of his visit to the last stretch of Les Marines. However, several witnesses reported the appearance also yesterday along with Les Rotes, so that, being the same group, they would have walked the entire length of our beaches.

A picture increasingly common in Dénia, which has become a very popular transit area among these marine mammals. Also, they are not afraid to approach the shore. On this occasion, they assure those who have been able to enjoy their company that were approximately one kilometer from the beach, but that the good state of the sea has favored that they could enjoy their presence.