The Civil Guard of Alicante has arrested three people directly related to an irregular auction of archaeological pieces, through an internet portal. Those investigated are charged with a crime against historical heritage and a crime of fraud. 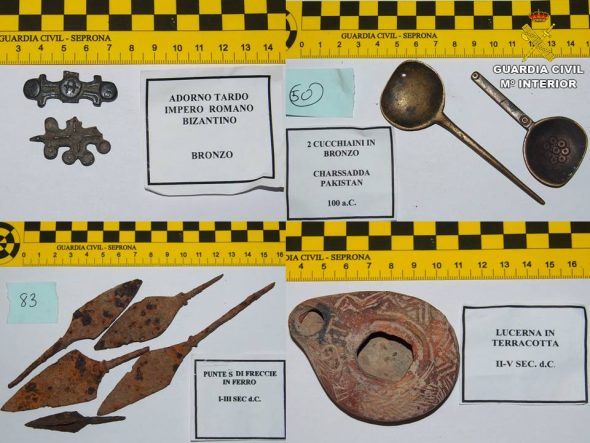 At the end of July of last year 2018, the Nature Protection Team (EPRONA) of the Civil Guard Command of Alicante, became aware of an auction of archaeological pieces, which would be carried out irregularly, through a Internet portal.
Quickly, the agents found the auction in question, which was valid for two days and was being organized by an antique shop in Denia.

In total, 219 pieces of different materials (mud, ceramics, glass, bone, silver, potin, iron, bronze or copper) were being auctioned, mostly ornamental pieces, coins, jewelry, dressings, etc., which were advertised in detail by lots, photos and specific data on their reviews, such as, for example, that some of them belonged to the Roman and Iberian times and other sources, such as Titulcia (Roman archaeological zone, located in the Madrid town of Alcalá de Henares) or even from Israel and the Balkans.

Once the pieces offered were located, EPRONA, together with a technical inspector of Movable Heritage of the General Directorate of Culture and Heritage, attached to the Territorial Directorate of the Ministry of Education, Research, Culture and Sports of Alicante, appeared in the antique shop, conducting an inspection jointly.

Those responsible for the establishment could not justify in a clear and detailed way the origin and the legal acquisition of these pieces, stating that they were only the intermediaries of an Italian citizen, domiciled in the province of Valencia, who offered them to sell them.
Before the first assessment of the facts and on-site study of the Culture technician, the seizure was carried out as a precautionary measure of all the pieces, the 219 that were offered online and the suspension of the auction immediately.
The corresponding police proceedings were brought to the attention of the Ilmo. Mr. Delegate Prosecutor of Environment and Urban Planning of the Provincial Court of Alicante, continuing with the investigation of the facts, for his total clarification.

For the valuation and study of the pieces (that is, to resolve their authenticity or not, as well as their origin and time), the collaboration of the Archaeological Museum of Alicante (MARQ), of personnel of the University of Alicante, of the Provincial Archaeological Museum of Alcalá de Henares (Madrid) and the Ministry of Culture of Alicante. Other important information for the investigation was also requested from the Ministry of Culture of Seville and the City Council of Marbella (Málaga).

In the same way, the collaboration of INTERPOL was requested to know if the pieces could have been stolen in some other country, or acquired irregularly or if they are coming from any plunder.

Once the reports of the different collaborating organizations, institutions and museums were received, the EPRONA agents carried out a thorough study of all the documentation collected, in close collaboration with the Environmental Prosecutor, reaching the following conclusions:

The pieces of Titulcia are AUTHENTIC and could belong exactly to one of the plunder suffered in that area for years, plots that were detected by those responsible for Culture of the province of Madrid.
The other pieces studied and valued by staff of the University of Alicante and the MARQ, belong to different eras (II iron age, chronology from the Neolithic to the bronze age, Roman times of the 1st, 4th and 5th centuries AD, as well as imperial bass).

These authentic pieces have been mixed with others that are not, that is, in that batch of old pieces that were being offered online for later auction, there are pieces that are mere copies and current reproductions.

After more than a year of incessant investigation, EPRONA finished the operation with the identification of three people, directly involved in the events, being a Spaniard and an Irishman (both neighbors of Alicante) and an Italian citizen, resident in Valencia.

The three have already been made available to the Court of Instruction No. 3 of those of Denia, as investigated, for an alleged crime against the historical heritage and for a crime of fraud, in the degree of attempt, since the auction did not reach materialize