The labor information of the vulnerable groups in the Marina Alta, collected by the Marina Alta Observatory, allows obtaining an x-ray of the current conditions in which the most vulnerable groups are, from which strategic lines and future actions can be established that allow higher rates of insertion or reintegration into the labor market of the same, so that active policies are generated aimed at the integration of the most vulnerable groups in a line of work towards real inclusion in companies in the face of the need to give opportunities to groups at risk of social exclusion. 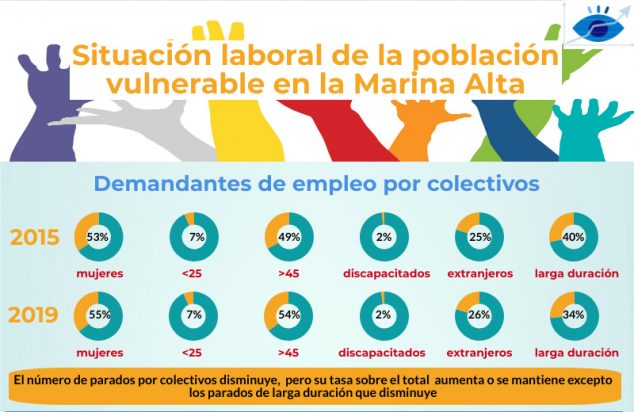 Women have been a group that has suffered gender discrimination in all productive sectors, and although in recent years the weight of women's hiring has grown to almost 2019% of the total in 48, there are still differences significant in terms of employment. The rate of occupation, employment and wages is lower in women than in men.

Hiring in the young group, that is, those under 25 years of age, increased positively during the 5 years of analysis, standing in 2019 at 25% of the total number of contracts made. The incidence of youth unemployment in the Marina Alta represents around 7% of the total unemployed. 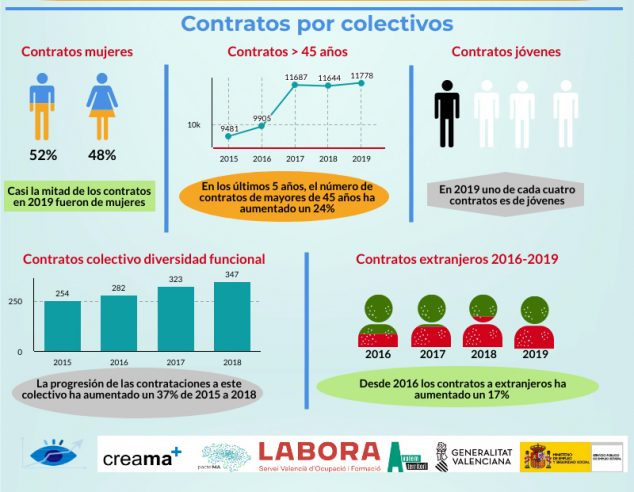 As for the group older than 45 years, the evolution of the contracts has supposed an increase of 24%. It is important to emphasize that throughout the five-year period studied there was a significant decrease in unemployment in this group of 15,22% in the Marina Alta, however, the percentage distribution that this group of jobseekers covers with respect to the total number of unemployed, It increases gradually year by year, as a consequence of the aging of the population, which causes the global average age to increase as it has a high distribution of people with ages greater than or equal to 45. In 2019, the unemployment rate of the largest group represents 53,94%.

On the other hand, the group with functional diversity is historically presented as one of those with the greatest barriers when it comes to their job placement. It is observed that there has been a practically linear progression of hiring, which has meant a 37% increase in the level of hiring from 2015 to 2018. Regarding unemployment rates, the proportion of job seekers with functional diversity with respect to Total unemployed is insignificant, as recorded in 2019, it represents 2,5% in the Marina Alta (from 1,71% in 2015).

Another group considered at risk of social exclusion are foreigners. This group is the subject of a specific study due to the difficulties it has in entering the labor market; In these last 4 years, in the Marina Alta, the number of hires has increased more than 17%. Taking into account that the weight of the foreign population over the municipalities of the Marina Alta is high, so are the rates of foreign jobseekers over the total number of unemployed. In 2019 the foreign unemployed rate is 25,59% in the Marina Alta.

The “long-term” group, that is to say, those registered demanding a job for more than 1 year, represent a high percentage when this group includes the group of people older than or equal to 45 years. According to the latest published data, the rate of jobseekers in this situation over the total unemployed is 34,46% compared to 40% in 2015, which denotes a downward trend.