Ondara will celebrate the XXXIV Fira de Fires 9 from 24 to November, under the motto “La Fira de Fires from 1690”. The presentation of the event this morning was attended by the Mayor of Ondara and responsible for the Department of Tourism and Economic Promotion, José Ramiro; the techniques of Macma, Núria Gómez and Majo Puig; the president of the Association of Businesses and Businesses of Ondara (ACO) Inma Peiró, and the treasurer of the association, Lorena Fornés; the ADL d'Ondara Technique, Ana Cotaina; the president of Ondara Custom Club, Pedro Brígido; and the artisan of the poster of this edition 2019, the local painter Toni Ortolà. 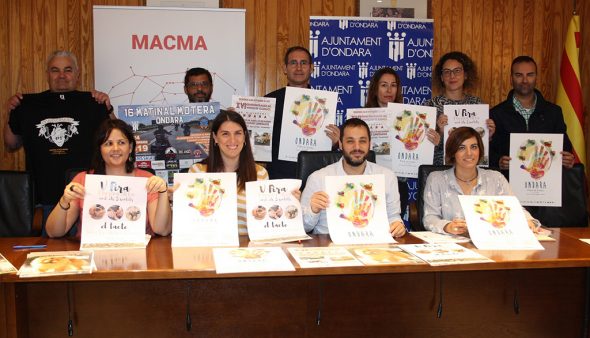 Presentation of the fira de Ondara

As explained by Mayor of Ondara and responsible for the Department of Tourism and Economic Promotion, José Ramiro, there will be three weekends with a full program of events. On the first weekend, on November 9 and 10, the V Fira Comarcal amb els 5 sentits «El tacte» will be celebrated: Saber fer, Oficis i artesanies, organized by the Macma, and the Forum: «The paisatge de pedra dry Reptes i oportunitats de futur (inside the Prado) (coordinated by the Macma); the Canine Contest (Sunday 10 in Calle Vicent Andrés Estellés); the novelty of the Fira «Fet a mà a la Marina» Productes artesanals i gastronomtronicas de la comarca (Sunday 10, in Av. General Bosch) and the fair of attractions (Nacions sense Estat street). The second weekend of the fair (16 and November 17) will be dedicated to the XXXIV Fira de Mostres i Compres (in the Prado); the Medieval Mercat (Av. General Bosch), the novelty of the recovery of the Animal Fair (Bullring); and the fair of attractions. And on the third and last weekend (23 and November 24) the protagonism will fall on the XVI Matinal Motera, the Gastronomic Tasting of the Prado, the Concentration of Classic Vehicles and the Fair of Attractions.

The fair of attractions will be installed again in the public car park located at the north entrance of the town center, on Nacions Sense Estat street. The children's days of the fair will be on Wednesday 13 and November 20, and the attractions will be priced at 1,5 euros. The "trenet" will make a circular route through the town of Ondara, transferring visitors to create atmosphere. Among the animation of the fair, it will also highlight the participation of the Ondara Musical Union on the occasion of the feast of Santa Cecilia; the first weekend, with the youth band's parade, and the second weekend, with the UMO's parade.

As for the fair poster, it goes on the same graphic line as the previous years 4, related to the content of the regional fair; in this case, the craftsmanship and the work done by hand in the Marina Alta, represented by a hand that “touches”, the touch being the sense to which the Marina Alta fair of 2019 is dedicated and behind, the typically fair attractions, symbolizing a ferris wheel, creating a symbiosis thanks to the color that reflects the movement and animation of the fair, as explained by the painter Toni Ortolà, creator of the fair poster.

The “V Fira Comarcal amb els 5 sentits« El tacte »: Knowing fer, craft and crafts, coordinated by the Macma, and the Forum:« The paisatge de pedra seca. Reptes i oportunitats de futur »will be held at the Prado de Ondara during the first weekend of the November Fair (9 and November 10). This year, one of the objectives of the fair is to give it a new approach through the Forum as a space for work, debate and the creation of synergies for the implementation of sustainable and regional tourism projects. And on the other hand, encourage the generation of circular economy through an external and complementary fireta in which producers and artisans can sell the products made in the Navy, thus encouraging the creation of a craft proximity market. This year 2019 had to dedicate the fair to the sense of touch, and the proposal was to revolve around crafts and crafts, as detailed by the Macma technique, Núria Gómez. Therefore, the Forum will be dedicated to one of the most transversal and idiosyncratic techniques of the region: Dry Stone Landscape and other construction techniques. The forum will be coordinated by the MACMA together with the GAL Muntanya d'Alacant. On Saturday, November 9 will be dedicated to reflection and debate, and on Sunday 10 will focus programming on a more familiar audience and a more playful-festive proposal, with the fire of artisan products, contacts, workshops or routes around the crafts, stone and collective popular culture, as detailed by the Macma technique, Majo Puig.

Precisely, on the participation of Ondara in the Regional Fair, José Ramiro has advanced that the local stand will deal with the Valencian pilot; a ball game by hand, to convey the sense of touch. For this, the collaboration of the Ondara Pilot Club will be provided, and related workshops are planned (doing "piles", rolling your hand to play pilota ...)

On the other hand, on Sunday, November 10, the traditional canine contest will also take place in the morning, which celebrates its 14ª edition, on Vicent Andrés Estellés Street (back of the Prado). During the first weekend will begin the fair of attractions in the street Nacions Sense Estat.

The second weekend of the fair (16 and November 17) will be dedicated to the XXXIV Fira de Mostres i Compres (in the Prado); The Mercat Medieval (Av. General Bosch), the Fair of attractions, and as a novelty of this 2019, the Animal Fair is being recovered, which will be held in the Bullring, organized by the Association of Carreters and Cavallistes d'Ondara.

On the 16th and 17th of November the 34th edition of the Fair of Samples and Purchases will take place. An event in which local businesses and companies, and also some local ones, will offer a sample of their offers in products and services, with special fair prices. This fair has a large presence of businesses associated with the Association of Merchants and Entrepreneurs of Ondara, ACO, as confirmed by its president, Inma Peiró, who stressed that the Association takes advantage of the November fair to promote the Christmas campaign of ACO, which this year will raffle a prize of one thousand euros to consume in the associated stores, and two baskets of ACO business products will also be raffled. In this XXXIV edition, 31 exhibitors have confirmed their attendance, as explained by the ADL technician from Ondara, Ana Cotaina, who stressed that this fair is a regional benchmark and also from outside the region. This year 2019, the thirty exhibitors, with stands inside and also outside the Prado, are the following: JFM, Màxima Bikes, Monverd, Carnisseria Alberto Picó, Luansa, Mobles Ortolá, Motos Mahiques, Gala's, Passicos, Calçats Dora, Mobles Escrivá, Autoescola Ondara, Month of a thousand viatges, Kobold, El atán de Aitana - Coco kids, Aquarica, Coqueta Moda Infantil, Clinica Levante Ondara, Nuts La Marina, Maika Regals, Pigtails Kids fashion & accessories, Comersintex, Tomás treballs de painting, Cortines Estarca, Marina Digital, FarmaOndara, Upi Ondara Informàtica, Mireia Costa, Toni Ortolá Ratlla a Ratlla and Weddings and flowers (company created in Ondara that brings together 14 business of the events sector, and that will install as an innovation an outdoor tent of 100 m²).

On the other hand, the Medieval Market will be installed on Saturday 16 and Sunday 17 in November, between the Prado and the Bullring, in the General Bosch Avenue, and in Vicent Andrés Estellés Square. The Mediaval Market will have sale of products, food and drink, tavern, as well as entertainment, falconry and children's activities; characters, workshops, music, performances, medieval attractions, crafts, and endless proposals for all audiences, as stressed by the Mayor, José Ramiro, being a proposal with great dynamism. That weekend will continue the fair of attractions.

The third and last weekend of the fair (23 and 24 of November), will be celebrated the XVI Matinal Motera; On Saturday 23, with the evening concerts on the stage located in the back of the Prado, and on Sunday 24 in the morning, with the great biker concentration organized by the Ondara Custom Club, which in previous editions has had 2.000 motorcycles. The XVI Matinal Motera will be held on Doctor Fleming Avenue (in the same location last year), while the Concentration of Old Vehicles will take place on Alicante Avenue. The trenet will serve to support both events.

Pedro Brígido, president of the Ondara Custom Club, has announced that on Saturday, November 23 will commemorate the 15 anniversary of the local biker group, and for this there will be dinner at the Prado, evening concerts on the stage of the back of the Prado, and bar service with drink and food, by the Soledad 2020 Commission. On Sunday 24 in November, the Matinal Motera will begin at 9 hours with the opening of the inscriptions. Lunch will be held at the Prado (gastronomic tasting), and the gambero appetizer will also be offered to the participants. There will be trophy delivery and performances by Perversió and Marcos Elvis. Participants in the XVI biker morning will also receive their commemorative t-shirt, design of the tattoo studio "Old Dog"

The “Gastronomic Tasting of the Prado” (Sunday 24 of November) will complete the programming of the last Sunday of the fair, with gastronomic tastings by the participating stands within the Prado: Ca Paquitina (Ondara), “Al Teu Gust-Menjar per emportar” (Ondara); the Coqueria-Mossets Artesans (Orba), Forn del Cristo (Swedish), Fine Carnage (Swedish), Pastisseria Victòria (Ondara), and Rebost de Mari (Ondara). As in previous years, you can purchase tickets for 5 drinks for 6 euros. In addition, the last weekend, the fair of attractions will still be installed.

The Fallera Local Board asks the authorities to set an example and allow in 2021 to celebrate Fallas 2.0
03 November 2020

The Floats of Dénia: when are they, parade, history and photographs
August 01st, 2020
Leave a comment