More wood !: The story of Manuel Soler and the largest xiloteca in Spain

Hidden among the small streets of Les Rotes, a few meters from the sea, is a large plot of those that still respect the vegetation of the place. Where you can glimpse what in other times was the area, which has now been taken over by cement. Large and leafy trees among which Manuel Soler lives, in an idyllic fairytale cabin that he built himself a short distance from his most precious treasure. Despite the ignorance of most of the neighbors, at the back of the plot, in another wooden house that also came out of their hands, the largest xiloteca in Spain is hidden. 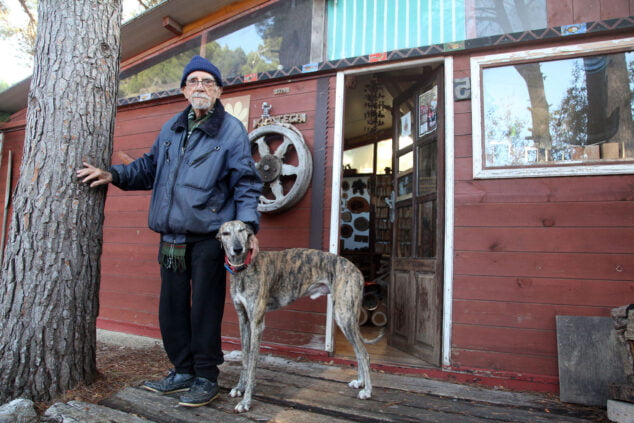 Manuel and Caco next to the entrance of his xiloteca

"But what is a xiloteca?"was the first thing that, logically, I asked myself when my partner advanced the story. My vast knowledge of Greek made me intuit that we were, as when we speak of a library, before a collection. Now, of what? What is that xilo that aroused so much interest in its owner?

When we arrived at the place, a picturesque place with large pine trees, we went to the bottom where, in a wooden cabin, with the poster announcing Xiloteca Next to the door, Manuel and his dog Caco were waiting for us. Inside we find a room full of shelves in which, instead of books, thousands of perfectly labeled woods are displayed. That was xiloExcuse me, and this is the story of Manuel, which is necessary to know to understand the reason for his collection. 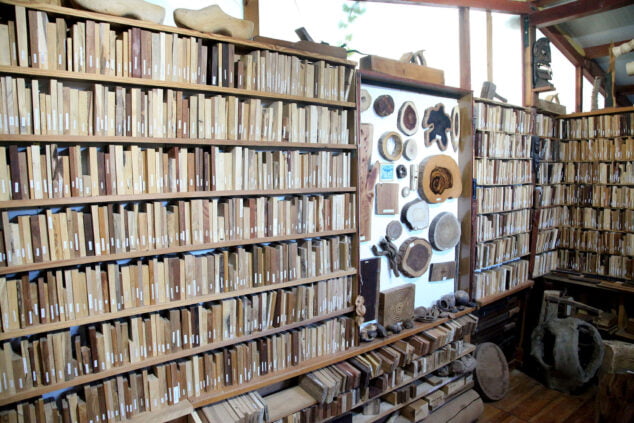 Wood exhibition in the xiloteca

Manuel Soler, now 87 years old and the only inhabitant of the place with Caco, was captain of the merchant navy for 38 years. He transported a wide variety of goods, from oil to, on one occasion, 3 elephants that he took to Seville for the Circo Price, he remembers with amusement. But the vast majority of trips were made transporting ammonia, which forced him to rely on strict medication for exposure, which, as he himself says, "It was almost worse than the disease" since it caused loss of vision to a large part of the crew. 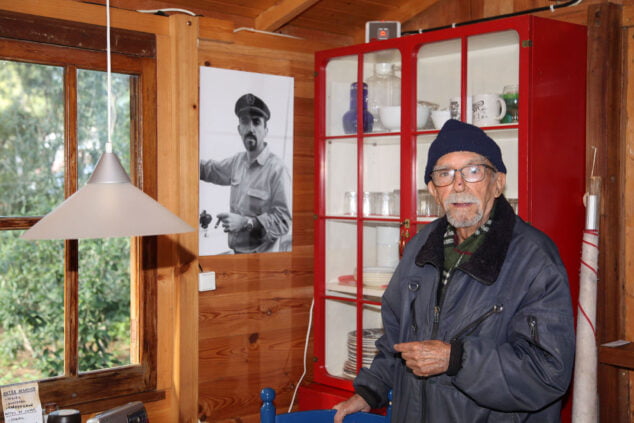 Manuel next to a photograph of his years as captain

In his extensive experience he had to navigate dodging mines, which floated forgotten after the Vietnam War, and even deal with pirates on more than one occasion.

The latter piques my interest, since what is better than a good pirate story? Manuel tells us how he had to endure different boarding attempts on their way through Nigeria. On one occasion, an assailant managed to sneak into his ship through the broom, which is the opening in the hull through which the anchor chain passes. Luckily, they detected him and quickly arrested him. "They gave him several slaps and blows and he jumped off the boat", leaving behind his knife that Manuel still keeps today. But he also explains that other boats were not so lucky, because on several occasions they retained colleagues, even going so far as to assassinate the captains after managing to get hold of the keys to the rooms where they kept the material and cargo. 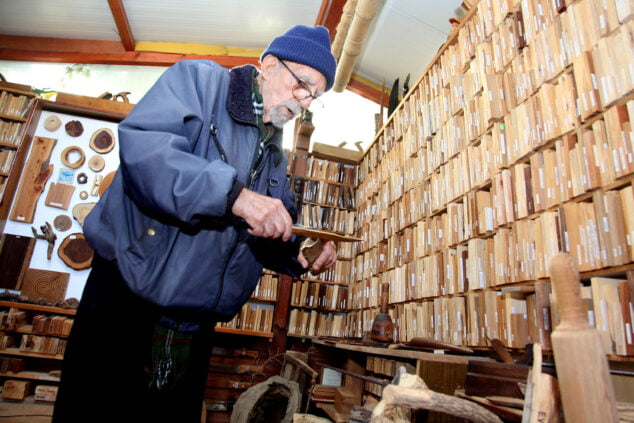 Since the age of 55, he has been retiring, partly because of the sea regime, partly because of the aforementioned problems suffered by those who transported substances such as ammonia, which later "compensated" them by reducing their working life. And he does it in Dénia, in the plot described at the beginning, despite being native of Swedish. He decided to move to the Marina Alta after spending long permits with a partner camped in Les Rotes, when it was still "forest". That led him to appreciate the landscape and peace that the place breathes, so he decided to acquire a piece of the area. 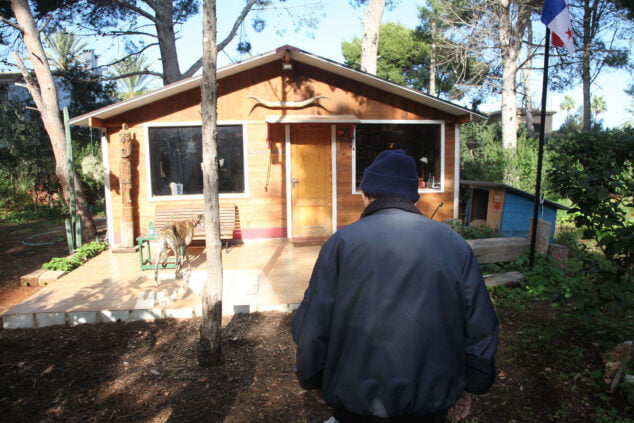 Manuel's house, a few meters from his xiloteca

But the question is still there. Why a xiloteca? It all started, he tells us, when in one of his jobs in Nigeria some Italians gave him 6 samples. They were perfectly cut wooden rectangles so that their qualities could be better appreciated. But he stayed there until another day, once retired, making a piece of furniture in the place where he now lives, carved an identical piece to the court of those Italians. "There the bug woke me up and I began to be interested in knowing all types of wood and bringing them home". 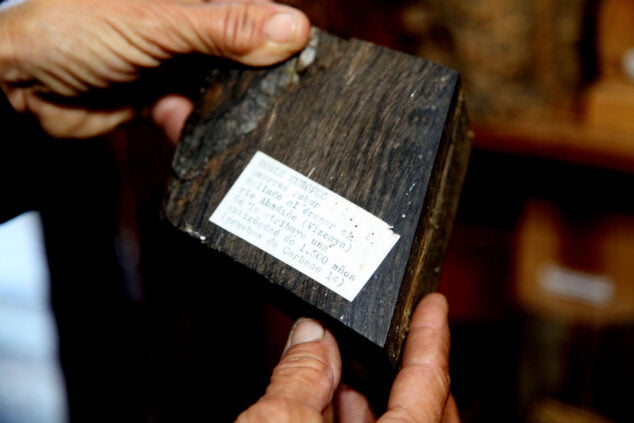 Manuel shows us one of his pieces

He started by asking a pruner for different woods, later he even ended up making trips on purpose to get precious samples that he could only find there. On one of those trips, to Cuba on that occasion, He got rid of all the clothes he was carrying to return with the suitcase loaded with new purchases for your xiloteca. "More wood!"laughs Manuel. He also involved his acquaintances so that on his travels they would get him a copy that he did not have then. 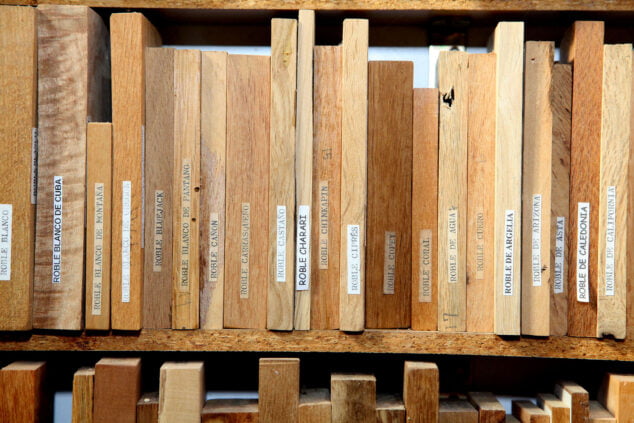 Exposed pieces between the shelves

Later he joined an international association of collectors like him, putting him in contact with other seekers around the world with whom he began to exchange copies.

So until about 4.260 samples which he now exhibits in his cabin. A great work that began alone, although it influenced many pupils who now have their own xilotecas in different parts of Spain. But none with as many specimens as Manuel's, despite the fact that, unlike other collectors in the country, it has never received the help of any administration. 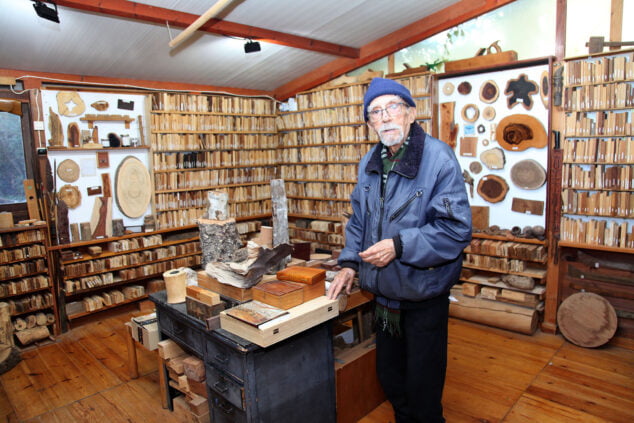 Manuel Soler with his collection

"I have offered my xiloteca to three different mayors to be exhibited in Dénia and they have always given me long"recalls somewhat frustrated. Even on one occasion he says that saw a large poster with text in the style of Visit the xiloteca de Dénia, using its collection as a tourist attraction. After that, in a visit he received from a group of tourists with a person in charge of the City Council, Manuel could not take it any longer, making it clear: "This is Manuel's xiloteca, not Dénia's xiloteca, that here no one has put a hard part apart from me!". 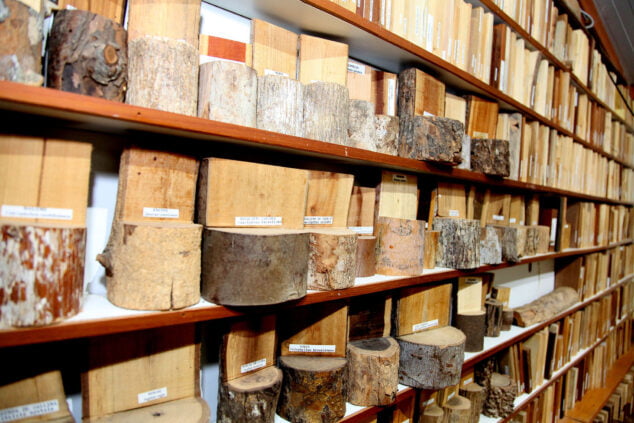 Inside the largest xiloteca in Spain

Manuel's xiloteca is a collection cared for with great care and admired among the great experts in the field. His collection and his knowledge acquired over the years has led him to participate in multiple conferences as invited expert and he has even published several books where, in some of them, he records all the contents of his cabin with illustrations that he has made himself.

A collection among which innumerable knowledge is learned. Walking between the shelves I find a piece of a bamboo specimen. Manuel, seeing me prying, asks me to take it and admire, above all, the size. One meter measures. "It's not that bad either", I think. He tells me that this is what this species grows every day, how much it is so that if you sit down to observe it you can see how it is rising. 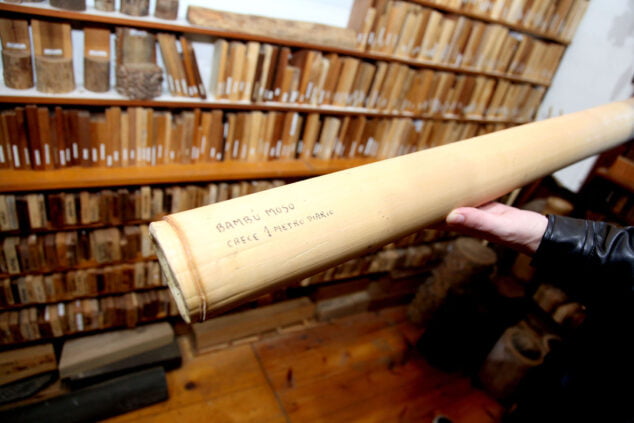 Bamboo species that grows one meter every day

It also introduces me to the Amourette, the most expensive wood of which it owns because of its beauty and how difficult it is to find it. Some of the samples in his collection come from trees that today are at risk of disappearing due to fashions and the consumption of a certain type or style of furniture. 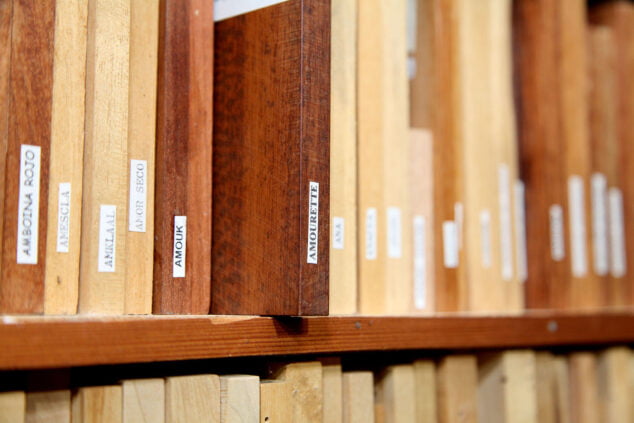 Amourette, the most valuable wood in the collection

But it has another element in particular that it is practically impossible to find elsewhere. He keeps it in a transparent jar that hangs on the wall on two shelves. He doesn't say it, but I just discovered his jewel in the crown.

In 1937, the French Ferdinand Navarra found hidden in a glacier the remains of a boat. I suspect that wood comes from there, but history still gives for more. The glacier was in mount ararat, which borders between Turkey, Armenia and Iran. It is 5.180 meters high and the boat was found under the ice near the summit. 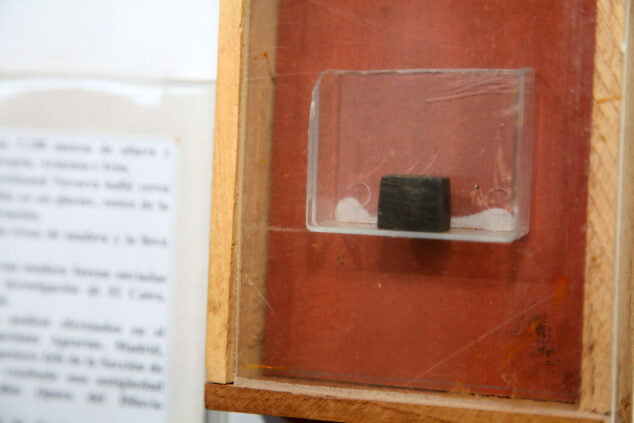 Ferdinand Navarra managed to recover a piece of wood and send samples to various research centers in Cairo, Bordeaux, Paris and Madrid. In this investigation it was discovered that the wood was from White Oak, a species that does not exist today. But the most shocking thing is that it was estimated that its age was about 5.000 years. Time of the Universal Flood. Manuel doesn't say it, being even a bit skeptical, but he forces me to join the strings until a name comes up in the conversation with which the boat can be known today. The one with the most famous ark, owned by the most famous Noah. 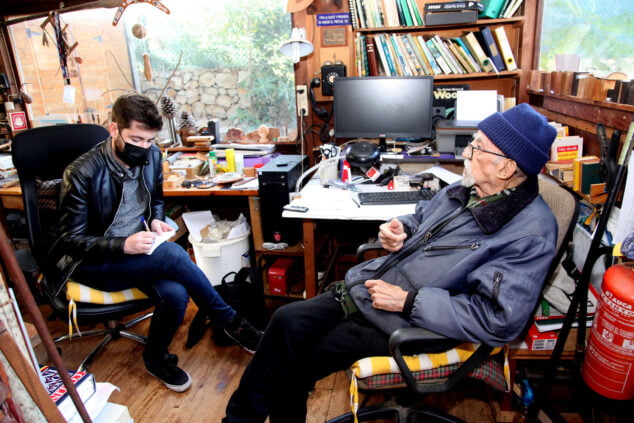 However, when asked about his most precious piece, he moves away from it to discover the most sentimental part of his collection: the guayacán. It is a hard and heavy wood with which it lived during its long life at sea. It was used to manufacture the bearings for the shafts of the propellers of the boats. All the ships in which he sailed carried it, so it is not surprising that he had a special fixation for that piece of wood that is now exhibited in his xiloteca.

The future of the collection

A doubt, which is discovered as very silly after Manuel's answer, arises to me when I admire so much wood: is there any that you miss on your shelves? Answer me that there are more than 70.000 woods different, so of course the collection could continue to grow. 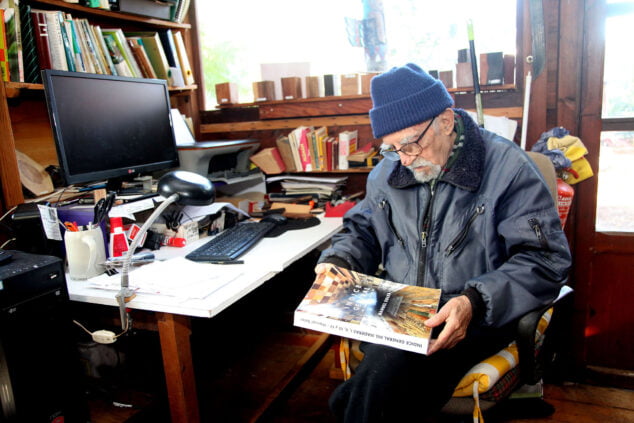 One of his many publications

However, he is not very convinced to continue with this work. Manuel carries more than 20 years creating and caring for your xiloteca, in which the public administrations have shown little interest. And now, with the visible impediments of age, he prefers to rest and contemplate the result of two decades of hobby. 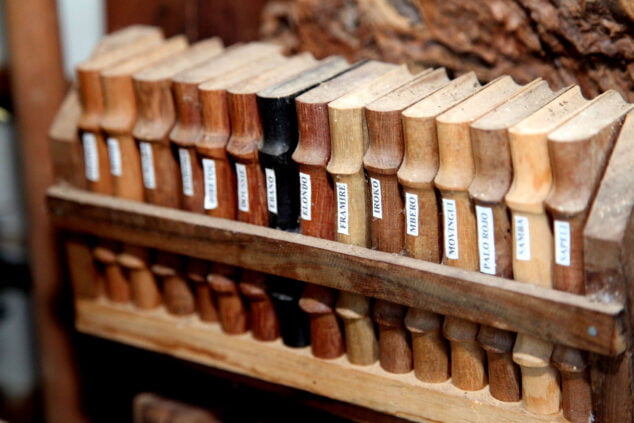 More specimens from the xiloteca

A boredom that I discover when I joke with the possibility that they discovered his collection termites that wanted to binge. He replies that there are always termites, so he had to treat every two times your samples with great care. But now he is already somewhat indifferent and has stopped carrying out such laborious care. 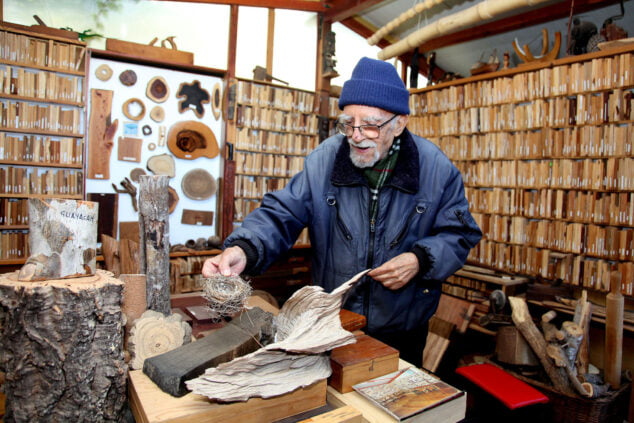 Logically, I regret the joke on the spot. I ask him, seeing his reaction, if the xiloteca has closed its doors to the public forever. Manuel cheers up again and answers me flatly that not at all. What its doors are open to all and that you will be delighted to continue receiving visits from curious people who want to enjoy a unique collection.