This morning the residents of Dénia have started collecting signatures to request that the situation of Gorgui Lamine, the hero who saved a neighbor in Dénia from the flames last weekend. However, the City Council has informed Dénia.com that they have also requested the Government Subdelegation to study the regularization of both Lamine and his wife and son. 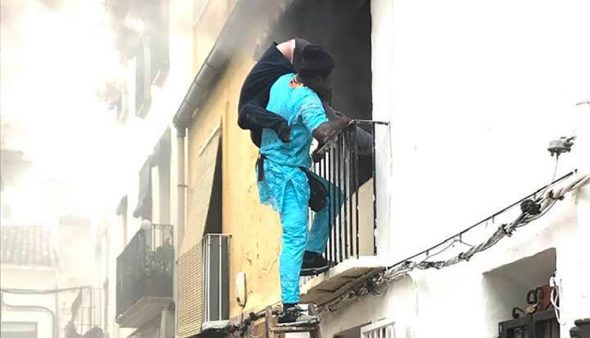 Gorgui Lamine carrying out his deed

Gorgui Lamine has become famous in recent days by carrying out a heroic deed with which his integrity was played to save a man with reduced mobility who asked for help from his burning house. It happened in the Baix la Mar neighborhood, where Lamine decided to climb to the balcony to fly the victim out of her home. After that, he left the place as quickly as he arrived.

After reaching its history in every corner of Spain, discovering that it is a father of 20 years of Senegalese origin and in an irregular situation, the residents of Dénia have decided to mobilize to get him rewarded with a residence permit. They have done it through the platform Change.org, where they request the mayor, with the collection of signatures, to reward him by regularizing his situation.

What they did not know is that, while starting this neighborhood initiative, the City Council did the same with the Government Subdelegation, transmitting the facts carried out by Lamine to request that their regularization and that of their family be studied, since such approval is contemplated in acts of this type and when it comes to an action of great popular interest, as is the case.

In addition, the City Council of Dénia has already announced that it will decorate Lamine for its action, granting it the distinction for the intervention of civilians in acts of emergency or rescue of people.