Dianenses will choose which heritage they prefer to preserve

The residents of Dénia can contribute their opinion on the value they give to the heritage of the city. The experience is part of the European Part-Her project that attempts to identify what elements, materials and immaterials, feel and estimate as identifying each of the participating cities. A free internet access form aims to collect the first data. 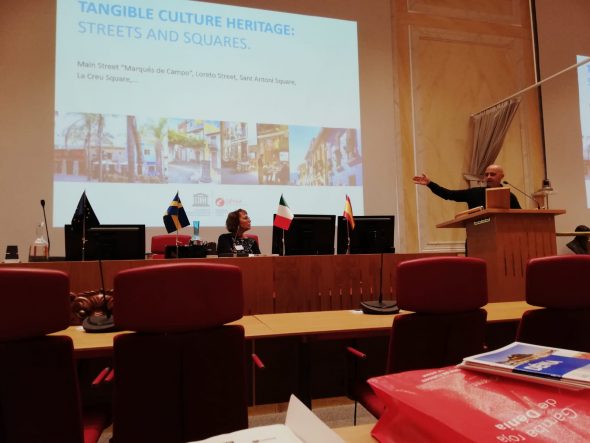 On October 1, 2 and 3, within the project schedule, a delegation from Dénia composed of the technicians of the departments of Archeology, Josep Antoni Gisbert, the Office of Innovation and Creativity, Enric Gil, and Tourism, Eva Asperilla, and the representative of the Universitat d'Alacant Gabriel González, participated in a seminar on tangible heritage held in the Swedish city of Linköping, together with the other partners of the Part-Her project, which are the cities of Konavle (Croatia ), Tours (France), Parma (Italy), Linköping (Sweden) and the Kassel region (Germany). This project is the result of the collaboration agreement between Dénia and Parma as creative cities of UNESCO gastronomy.

The Part-Her project seeks the citizen assessment of cultural heritage, whether material or immaterial, and the purpose is to know what citizens value as heritage, what is important for them and worthy of preserving for the next generations, what they identify as their own cultural identity and how it interrelates in the European identity space.

The seminar discussed the methodology for collecting the information, the analysis of the data, the preparation of a list of assets based on citizen perception and what actions can be carried out according to the type of heritage listed. In addition, each city has presented the information that has already been collected and several local and national experts have lectured on Linköping's heritage and the protection of heritage in Sweden.

A fundamental element of the initiative is a web page where the project is explained in detail and that is expressly designed to be able to collect the citizen's valuation of the heritage. On the website there is a very simple questionnaire, with which citizens can participate and make their contribution, suggestion, or proposal to identify local heritage.

From the Office of Innovation and Creativity, all citizens are invited to actively participate in the project and complete the form in the following link https://www.parther.eu/en/se-parte-del-proyecto/