The day arrived: today the Renaissance staircase of the Palau del Governador in the Castle is presented

Two years after the start of the works, and months after its completion, today Thursday, 12 of April, is the chosen day so that the result of the rehabilitation works of the Renaissance staircase of the Palau del Governador is presented in society. 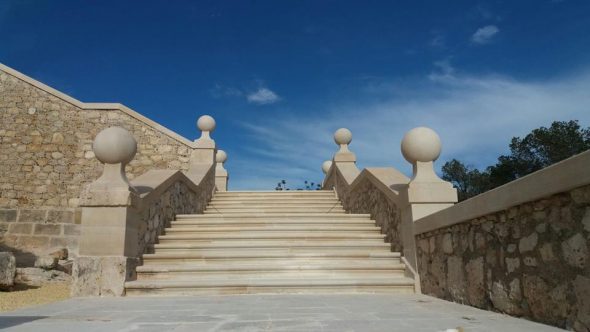 At the 11: 30 hours the event is scheduled, which will be attended by the Government delegate in the Valencian Community, Juan Carlos Moragues, the General Director of Architecture, Housing and Land of the Ministry of Public Works, Antonio Aguilar and the Mayor of Dénia, Vicent Grimalt.

The main objective of this action has been to recover the T-ladder, a construction that currently can only be found in Dénia and El Escorial; and linking the Governor's esplanade with the upper part of what was the Palau Vell, where improvements have also been made.

Moreover, thanks to the archaeological tastings on the surface of that palace, it was found, in August of 2016, that there are indications of what was an Andalusian palace between the time of the end of the Taifa and the Almoravid kingdom, around the year 1.100. This fortification found had houses that probably belonged to government officials who managed the Dénia andalusí.

The staircase is dated in the 17th century and was built as part of a palace created for the king to come to Dénia for his honeymoon.