The Valencia City Council has published the finalists of the Senyera 2019 Award. An award to stimulate and promote the professional career of artists from the Valencian Community. With an economic endowment of 12.000 euros. The contest does not distinguish between painting and sculpture, and opens the doors to any manifestation of visual arts. 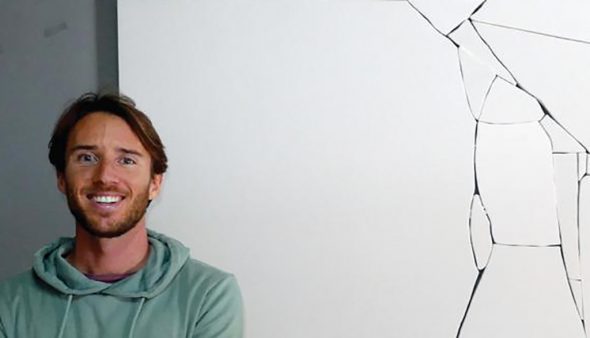 Carlos Romany with his work

The young artist, appears in the Valencian art scene with his work South. An investigation around the fracture with a technique difficult to classify. The work reflects a reality composed of fragments, multiple and reports that he says "Evidence that reality, beyond being considered as linear and totalitarian, is quite the opposite, fractional, heterogeneous and extensive".

His references come from the world of literature, philosophy, architecture and stories close to his personal history that allow him to generate a fracture of realities, which he then collects and rebuilds to generate his own cosmos.

Carles Romany was born in Dénia at 1992, graduated in Product Design from the Polytechnic University of Valencia and obtained a Master's Degree in Research in Art and Creation from the Complutense University of Madrid. He has worked within the world of sales in the Travesía Cuatro gallery (Madrid) and received the collaboration grant from the ARCO Foundation together with the Jérôme Poggi Gallery and the UCM.

Last year he returned to his hometown to undertake a personal artistic production project and make his way through his work. Since then, he has been working on his first set of works, presented under the title Zero point, which works as a whole installation.

The cycle "Memory and Future" presents a multifaceted vision of the war, repression and the Franco dictatorship through exhibitions, books, theater and conferences.
March 31 2021
1 Comment