Red Cross Dénia rescuers had an intense day on the coast of the Marina Alta capital on Wednesday. The poor state of the sea meant that they had to rescue two people from the water, with quick and effective responses from the vigilantes, while at the same time they continued searching for the bather who disappeared on Tuesday. 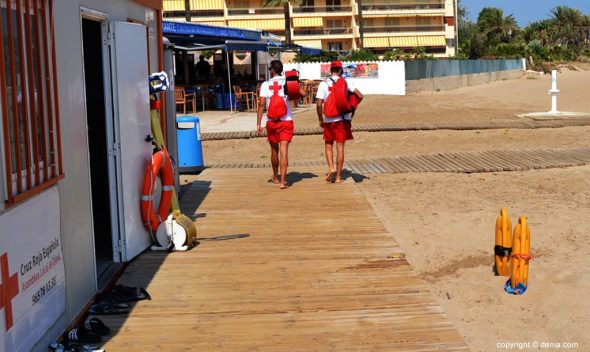 The Red Cross Dénia workers had no rest yesterday. At approximately 12 noon, with the yellow flag flying, from one of the surveillance chairs located on Les beach Deveses A woman in her 40s and 50s was observed nervously trying to stay afloat. The lifeguard who saw him, after giving the warning, rushed for the victim who was already asking for help and was currently struggling to stay afloat.

The woman who was vacationing in Dénia was 100 meters from the shore, but the quick response of the lifeguard did not happen to adults. According to reports from the Red Cross, the victim had swallowed a lot of water and did not respond to the offer of the lifeguard when approaching her to start the towing maneuver to the shore.

Once extracted from the water, the corresponding ground measurements were applied so that all the water that had been swallowed was discarded and they proceeded with the ambulance to transfer it to the Health Center. The relief team received the congratulations of bathers and the victim and family members for their impeccable performance.

A woman is helped after hitting her head in El Trampolí

On the other hand, on the other side of the coast, Les Rotes, at the height of the Trampolí and at 17:00 p.m. they had to attend to another woman for a head injury. It happened when the bather jumped headfirst from the diving board located on that beach without measuring well, hitting her head against the rocks that are there. 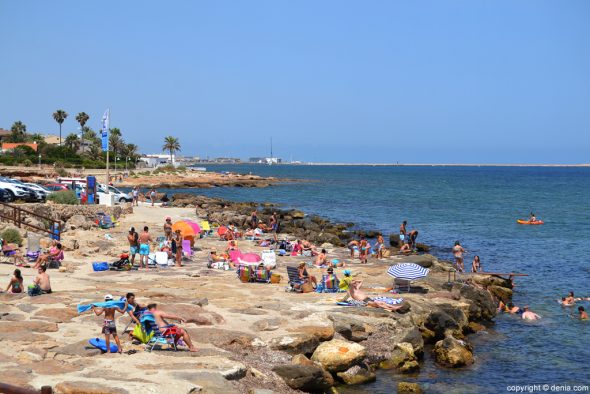 With a bleeding gorge in her head and stunned, she was taken out of the water by the bathers who were there while the lifeguard ran to take care of her. The ambulance of the Red Cross also moved to the place, which, together with the help of a doctor and nurse who were enjoying a bath, immobilized the victim with the board, healed the wound to stop the bleeding and then proceeded to your transfer to Hospital de Dénia.

The search efforts of the disappeared bather continue

All this happened while they continued with the search for the bather disappeared on Tuesday at noon, last seen swimming in the Els Molins beach. The helicopter, two jet skis and several ground patrols continued to work to find the man who has been missing for two days. At the same time, the Dénia Red Cross gave psychological support to the family of the disappeared with professionals.

Today they have resumed the search of the man from very early, this time without to the support of the helicopter of Marine Rescue understanding that he has covered all the territory from the air in repeated patrols without any result.