CD Dénia tribute to the family of Diego Mena Cuesta

El CD Dénia He paid a tribute to who was Honorary President of the entity, Diego Mena Cuesta, who died last July

It was his children, who were in charge of collecting a painting, in which the current team of the first team of CD Dénia is shown, and in which a picture of Diego Mena appears, right next to it.

Delivery to the relatives of this painting was made by the president of the Manager, Gema Estrela which they accompanied the mayor of Sports, Juan Carlos Signes and other managers.

The act was to commemorate that the football field, named "Diego Mena Cuesta". Just one day before, the act the city council had planned to suspend was suspended due to the rain, to discover a plaque commemorating the name change of the football field.

The fans who came to watch the match between Dénia and Atlético Saguntino paid a great ovation, in memory of the beloved, Diego Mena. 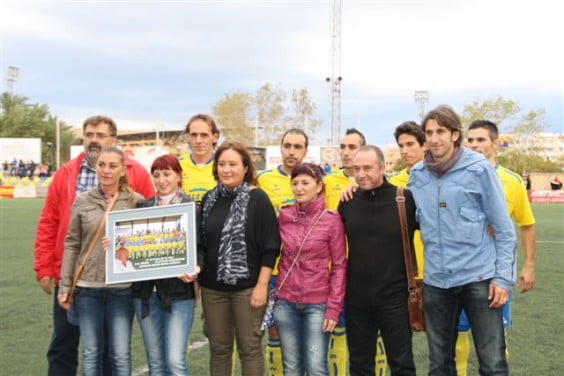