Is the climate changing? How it would affect us in Dénia

Today March 26 is the World Climate Day and we take advantage of this date to ask ourselves about the situation in our area: Have there been changes in the weather in recent years? What do they translate into our day to day? Are you noticing in Dénia? We answer these and other questions on such an important topic for the lives of people, animals and plants.

It is very important do not confuse weather and climate. Time is the meteorological situation in a certain place and moment, while the climate tells us about the average of the different phenomena (rain, wind, temperature ...) over a long period of time, at least 30 years. The evolution of the climate is measured over long periods of time, preferably decades, and the data must always be relativized.

According to José Ángel Núñez, Head of Climatology at AEMET Valencia, "During the last decades, undoubted changes in temperature have been observed, with rises close to 1 ºC in the last century". Also the temperature of the sea water has risen more or less one degree. 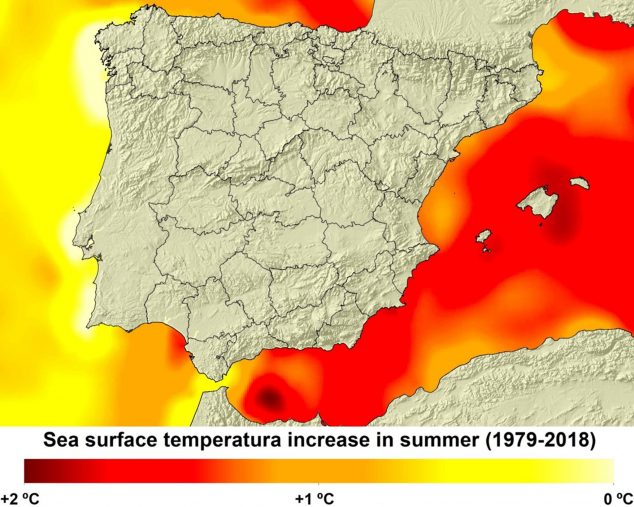 Temperature change in sea temperature, according to AEMET

Toni Bolufer, promoter of Meteoxàbia and an amateur meteorologist, explains that temperatures are higher than a few decades ago, and are especially noticeable in less cold winters: "The average rise is not so high that we appreciate it on a day-to-day basis, but it does make itself felt in a global decades.

How would this rise in temperatures affect Dénia?

For example, in the flowering of trees. Bolufer explains that flowering has been very early this year, but this is not something new: "One February 10 years ago I already had medlars." More than the action of meteorology, it considers more important the human intervention in some places: "The ports and beaches have been changed a lot more by the action of the people than by the weather." Núñez, from AEMET, points out that the rise in temperature causes impacts in many sectors: for example, in forest fires, in ecosystems, on beaches. The following graph shows the warming of the Alicante province: each bar represents the average annual temperature in a color code, and you can see how the warm years accumulate on the right side, in the most recent years.

Heating bars in the province of Alicante: Source: AEMET

Toni Bolufer explains the fruit of his observations: adverse meteorological phenomena have always existed, but it seems that "the trend is increasing, as all indicators are increasing". 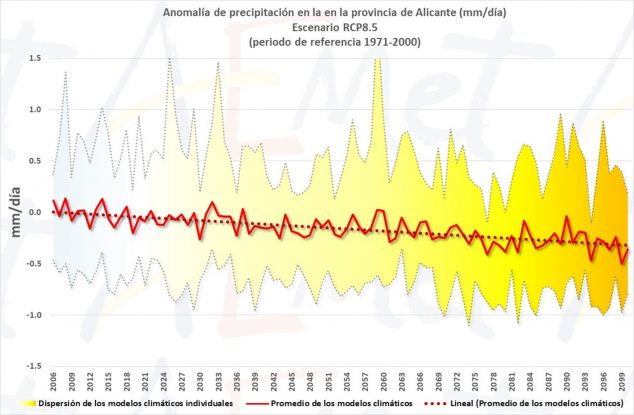 Predicted rainfall trend for this century in the province of Alicante, according to AEMET

Climate change has two immediate consequences that affect the coast: sea level rise and the most violent winter storms. This affects the entire coast, but the coastal infrastructures are very different from one place to another. According to the Head of Climatology at AEMET Valencia, José Ángel Núñez, areas that have been planned taking these aspects into account will adapt better than those that have not.

Toni Bolufer, for his part, explains that in the Mediterranean the rise in level would not be so noticeable as it is an almost inland sea (it only has access to the ocean through the Strait of Gibraltar). In our sea, the rise in the level would be important only in specific cases, he believes.