The coaches of the EMA Dénia-Athletics Club Baleària Diànium, since the State of Alarm was declared, they looked for ways so that their athletes could continue with their training. 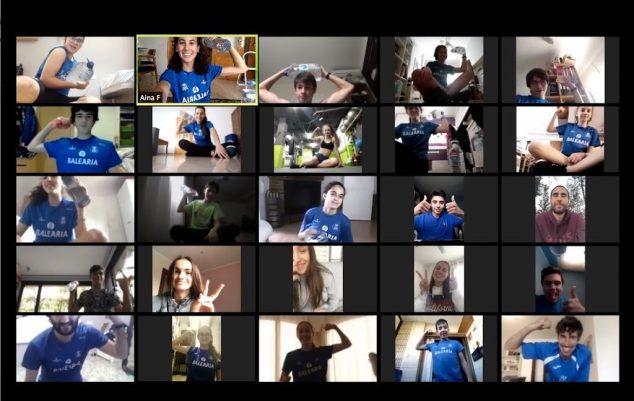 Athletes on a training day by video conference

In the first week of confinement, they sent the exercises to be performed to their athletes, accompanied by videos made by the technicians themselves doing the exercises. The objective was for them to carry them out in their own homes. In the second week they discovered the possibility of continuing to carry out the training through videoconference applications.

This possibility was positively valued for more dynamic training while maintaining the connection of the different groups. For athletes and especially if it is girls and boys it is very important to stay emotionally connected with their groupmates. This is a good way to continue maintaining the motivation of the workouts and to be more comfortable in your own homes without being able to go out.

Until now this has been the way in which the athletes of the club have been able to combine some individual sessions with 2 or 3 sessions a week by group videoconference.

All of them thank the coaches for the great work they do daily with the group of boys and girls, since despite the precarious conditions in which they are confined at home, they have continued training and improving week by week. The technicians have made it possible for the workouts to have been as varied as possible to avoid the monotonous sessions.

In addition to training, they have participated in two home athletics competitions such as the Decasations, organized by the Royal Spanish Athletics Federation, on April 11 and May 1, which were highly successful among the athletes of the Municipal School Athletics and the club itself.