Dénia follows the national trail, the regional capital and the two major parties fail to add the 50% of voting left as a third force more voted the European spring de Compromís, with an 11,88% and 1.449 votes collected among dianenses.

The surprise in Dénia gives also Podemos, A party that only 4 months of existence has managed to recruit 1.203 votes, 9,86% of the total and is the fifth most voted behind EUPV-EVWho gets 1.308 votes and 10,73%.

UPyD It is in the sixth position with 845 votes, followed by CiudadanosWith 410 ballots in his favor; PacmaWith 168; and close the list of most popular parties 10 RED movementWith 159 votes and Match X, Tenth largest party with 150 votaicones. 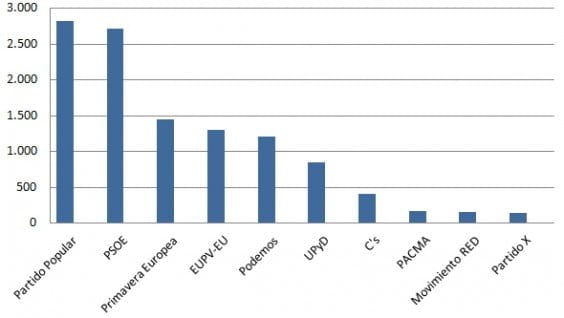 Participation in Dénia has been the 44,76%, which means that 12.379 people attended his appointment with the polls. Of the total votes cast, 190 239 have been null and blank.

With municipal elections a year away, this election should serve local parties to make a reflection of what you think the population and analyze the data obtained to know where to direct their efforts for the future, with the imminent arrival of the elections 2015.

Compromís Opinion: "Per al·lusions on October 9"
16 October 2020
Leave your comments