Search
Culture - About us - Monuments

The Hermitage of Pare Pere de Dénia: how to get there, history and photos

In full rise to Natural Park Montgó, there is one of the most visited hermitages in Dénia and the starting point of many hiking routes: the Pare Pere hermitage. It is dedicated to the religious Fray Pedro Esteve, the "Pare Pere" (Father Pedro, in Spanish). The hermitage is also well known in Dénia as the "Caseta del Pare Pere", because next to it is the small hut where the hermit spent the last years of his life, in direct contact with nature. As it is in the Natural Park, the hermitage does not have around it services such as restaurants or shops, only houses and urbanizations.

The Pare Pere hermitage is located in the I walked from the Cova de l'Aigua (the path of the Cueva del Agua), and you can access it in your private vehicle, on foot or by bicycle, since no public transport gets there. This is the map.

Along the Camí de Sant Joan

We leave from the roundabout on calle Diana, intersection with Joan Fuster and the beginning of the Camí de Sant Joan. Sign at the beginning of Camí de Sant Joan, at the intersection roundabout with Diana de Dénia street

After about 600 meters, before the urbanization Al-Khalif (You will see a tower of Arabic inspiration), we come to an islet with a carob tree where we have to take the detour to the right and continue until we come to a crossroads. Once at this point, we will take the path to the right, the Camí Assagador de Santa Llúcia, to a new junction located about 300 meters away where we will see indications. We follow the path to the left and climb about 400 meters, until we find the Pare Pere sculpture in front of the hermitage.

The second itinerary starts from Plaza Jaume I, from where we take Avenida del Montgó. Once we crossed the tracks of the trenet, we continue up the Camí Pou de la Muntanya until the path narrows, and there we will see indications to the hermitage. Take the detour to the right and follow the Camí de la Colònia, a road that runs through the woods with many curves and that goes up towards the mountain. Once at the top of this path we turn left in search of the hermitage.

Routes that start from there

The Pare Pere hermitage is the starting point of the most popular hiking routes on the Montgó. Start of various routes along the Montgó next to the Pare Pere hermitage | Image: Tino Calvo

Route to the top of Montgó

This is one of the ways to reach the summit (there are two more, from the shooting range and from Jesús Pobre). Here you can download the Wikiloc track for this route.

Visit some of the Montgó caves starting from Pare Pere. Download here the track for this route.

Fray Pere Esteve was born in Dénia in 1583, and has great devotion. He lived many years of his life in his hut, next to what is now the hermitage, devoted to retreat, meditation and prayer. He died in 1658 in a house in the Loreto street which has a commemorative plaque of that fact (in the section between Forn d'Algarra and Bretxa streets). He is credited with the beginning of the festivities in honor of the Holy Blood, patron saint of Dénia: they say that in 1633 there was a cholera epidemic in Dénia, and that Pare Pere had the image of the Sang Santíssima, and bless some loaves that the sick later ate. According to tradition, they were healed.

Construction and characteristics of the hermitage

According to recent studies by local historians, the house was built long before the time of Pare Pere, but he used it to protect himself from bad weather. Currently this house, built in stone and with a gabled roof, serves as a place for prayer and has become a corner where many faithful light candles and ask for their loved ones. The hermitage is very recent: it was completed in 1975 and opened to the public in 1983. Since that year the hermitage has been guarded by the Franciscan Enrique Oltra Perales, vice postulator of the cause of beatification of Pare Pere. It is dedicated to the Most Holy Blood of Our Lord Jesus Christ.

Although the chapel and its exterior can be visited daily Masses are held only on Sundays at 12: 30 noon. Mass schedule in the Hermitage of Pare Pere de Dénia

Pare Pere's body starred in a tense episode during the Civil War: it was verified whether his remains were human or a wood carving was being venerated. Here you have the full story.

In addition to this hermitage in his honor, Pare Pere has a street dedicated to him in the center of Dénia. Image in the hermitage of Pare Pere in Dénia | Image: Tino Calvo Detail of the interior of the Pare Pere hermitage | Image: Tino Calvo About Pare Pere, in his hermitage in Dénia | Image: Tino Calvo Detail of the exterior of the Pare Pere hermitage | Image: Tino Calvo 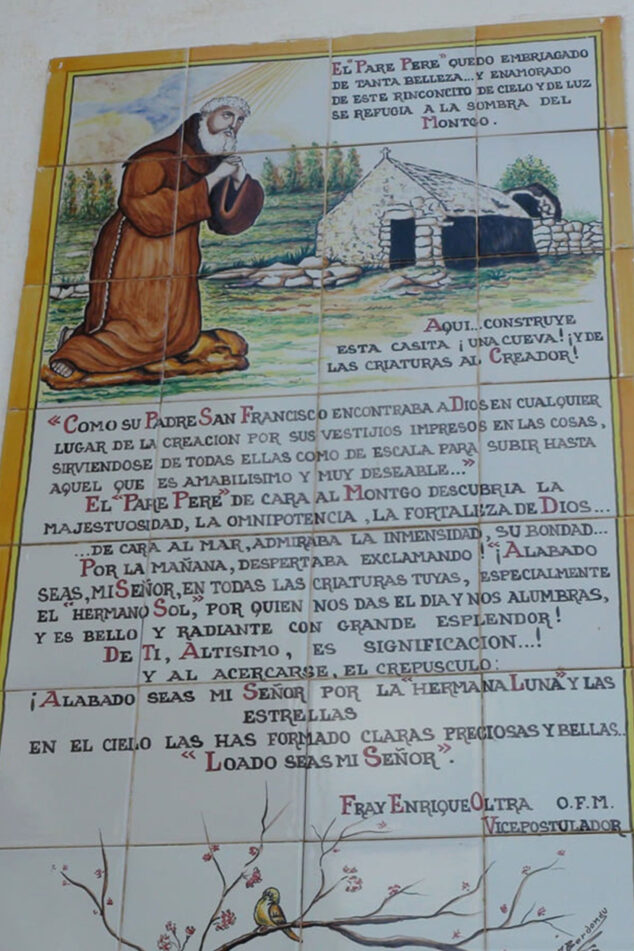 Texts to the Pare Pere in the Hermitage

Candles in the chapel of Pare Pere de Dénia

Via Crucis on the Montgó

Via Crucis area in the Pare Pere de Dénia

Canticle of the Creatures in the chapel of Pare Pere 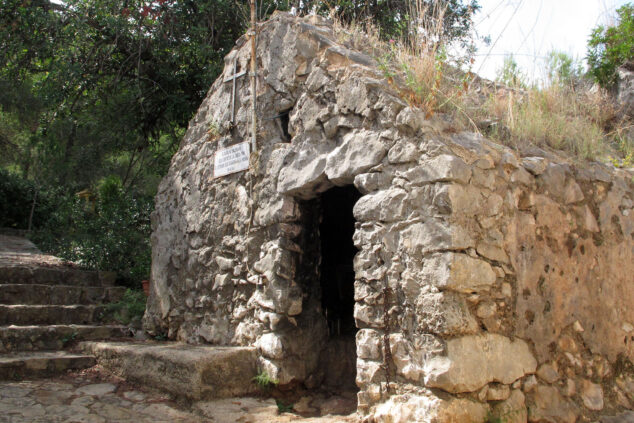 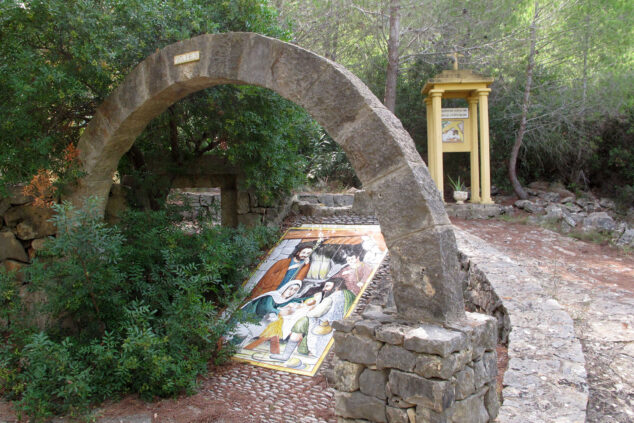 Detail of the Via Crucis of the Hermitage of Pare Pere 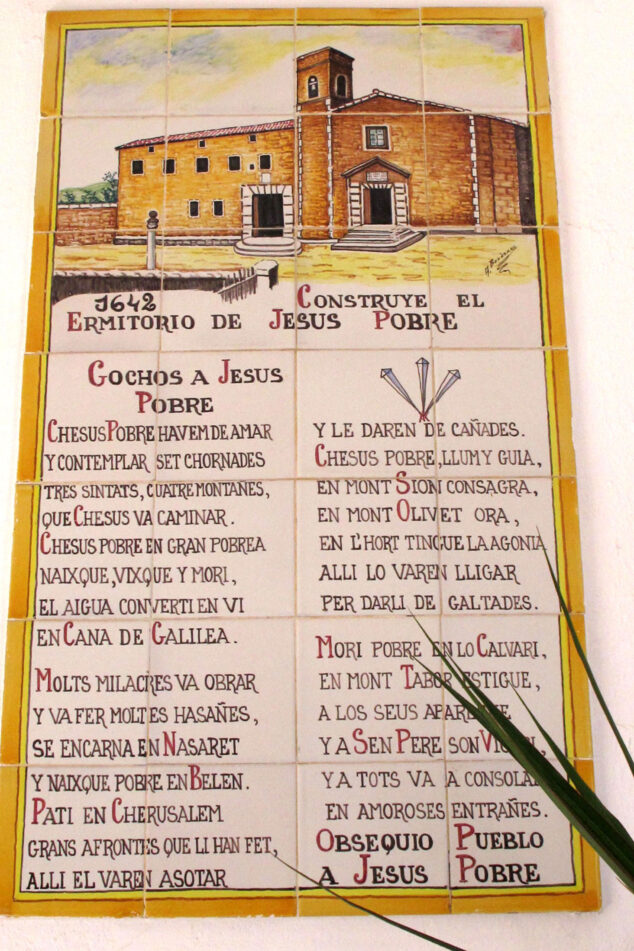 Looking out from Dénia Castle 100 years apart: this is how its views have changed
11th September 2022
Comments