The doctor and writer based in Dénia, Electra Peluffo, has given the Dénia City Council, for custody in the Municipal Archive of the city, two black ink drawings on paper by the Spanish avant-garde painter, José Caballero (Huelva, 1915 – Madrid, 1991).

The drawings, made in the 60s and 70s of the 1944th century, were the property of the marriage formed by doctors Antonio Muñoz, who was also mayor of Denia between 1963 and XNUMX, and Adelina Perrón, personal friends of the artist and also of Peluffo, to who gave him the precious works. 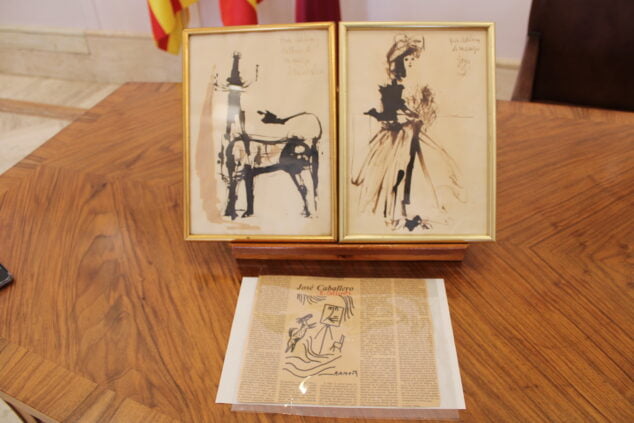 One of the donation drawings is titled “Schematic drawing of a bull that hooks a bullfighter's cape with a horn”, with a personal dedication that says “To Adelina and Antonio from their friend José Caballero”.

This work is possibly related to a tragic event, the death, in 1934, of the right-handed Ignacio Sánchez Mejías, a friend of the artist. In fact, one of the first editions of the collection of poems Llanto por Ignacio Sánchez Mejías by Federico García Lorca, which he published in Ediciones del Árbol in 1935, is illustrated by José Caballero, also an intimate of the poet from Granada and other figures of the 'time linked to the Residencia de Estudiantes and the Generation of 27 such as Buñuel, Dalí, Picasso or Neruda. 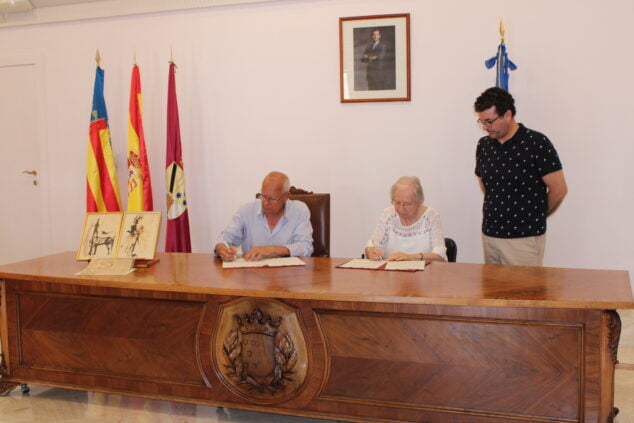 The other drawing is titled “Drawing of a vintage lady with a wide-brimmed hat and a long, wide lap” and is dedicated “For Adelina, from her friend Goya”, alluding to the style of the work. The donation, which was formalized today by the mayor of Dénia, Vicent Grimalt, and Electra Peluffo, is completed with a likeness of José Caballero with a drawing made by Rafael Alberti and published in the newspaper El País.

José Caballero spent his childhood in his hometown, Huelva, and later moved to Madrid. There, in 1932, he met Federico García Lorca, who commissioned him to draw the scenery for El amor brujo.

This first contact would be consolidated and Caballero would become the set designer for the popular theater company La Barraca, directed by Lorca, with whom he toured the Spanish towns. He made the scenery and costumes for many other works by the Granada-born author, such as Bodas de sangre, with the actress Margarita Xirgú, the Yerma poster and others. 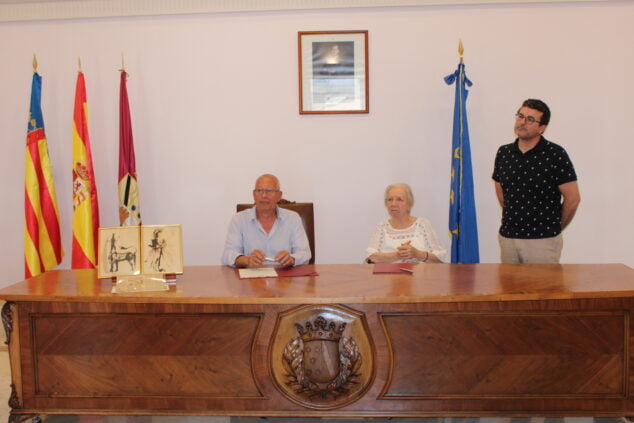 Donation of Electra Peluffo to Dénia

Caballero's pictorial work evolved from surrealism to abstraction. Throughout his life he received many awards, such as the National Prize for Painting from the Ministry of Culture in 1984. His work has been exhibited in prominent national museums, such as the Reina Sofía, and internationally, in the United States or in Bulgaria, so to speak.

The Municipal Archive preserves documentation of José Caballero's relationship with Denia, where he married María Fernanda Thomas de Carranza in 1964, from a family closely linked to the city. In fact, the painter's brother-in-law, Enrique Thomas de Carranza, was named the city's adopted son in 1972.

On the other hand, Dr. Pedro Muñoz Cardona, brother of Antonio Muñoz, was married to another of the daughters of the Thomas de Carranza family and was therefore José Caballero's brother-in-law. A relationship of friendship and family that the city of Dénia had as a meeting point and that now, thanks to the generosity of Electra Peluffo, crystallizes in a donation that enriches quantitatively, but above all, qualitatively, the funds of the Municipal Archive of the city .