On November 19, what will be the 35th edition of the Aplec de la Marina will be held, where the historical and national vindication have always been present. This anniversary, moreover, coincides with the 5th edition of a new stage of the Aplec that is consolidated by incorporating current values ​​such as the strengthening of the social fabric of the region and the promotion of music and art in the Valencian language. An edition that from the organization they point out as "very special". 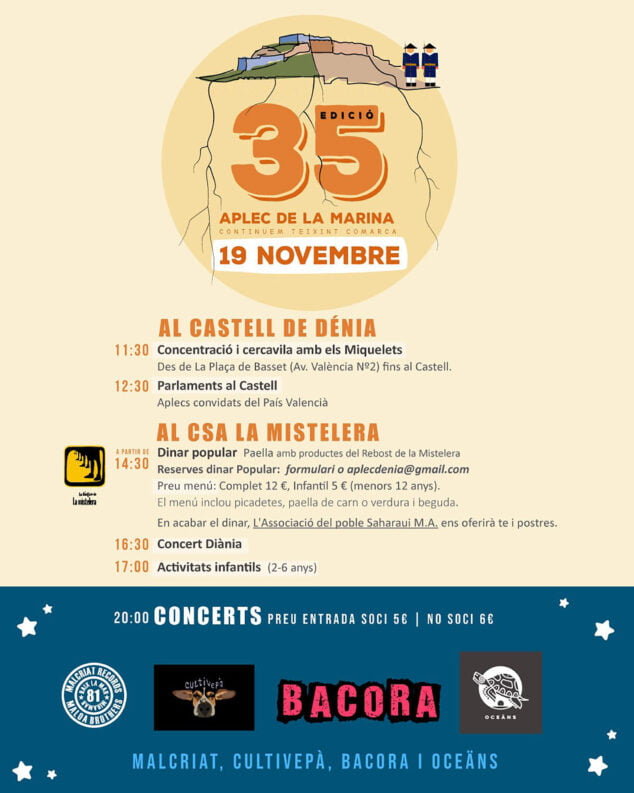 Poster and program of the Aplec de la Marina 2022

On November 19, Aplec will return to Castle, to honor «who fought against the Bourbon troops defending Dénia, the rest of the towns of the Navy and our Country. That is why we will ascend again to Dénia Castle hand in hand with the Miquelets. Because the national and historical vindication gave rise to the first Aplec and has kept it alive for 35 editions».

After the work during the last five editions of weaving region, this year they have set themselves the goal of going further and weaving between regions. Along these lines, for the first time the Castle's speeches will be starred by representatives of other Aplecs, who will share their experiences with those present.

Once the event is over, the most festive program will start, the Festa de l'Aplec, at the CSA La Mistelera de La Xara, where traditional popular food, activities for children, and musical performances in the Valencian language will take place during the afternoon and evening.