The program of linguistic exchanges “Relate and learn”, organized by the Department of International Relations with the collaboration of the Official School of Languages ​​(EOI) of Dénia and associations of foreign residents such as the U3A (University of the Third Age) and the Euroclub , turns 10 years. 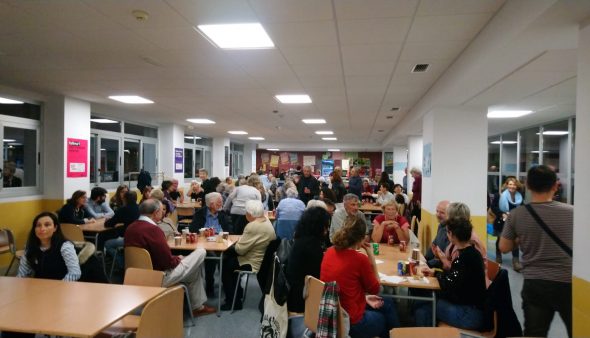 10 years of the Relate and Learn program

Last Friday a hundred people gathered to celebrate this anniversary at the facilities of the EOI of Dénia. The Councilor for International Relations, Raúl Garcia de la Reina, participated in the event; the program coordinator and technician of the City Council of Dénia, Enric Gil; Maria Galbis, director of the EOI; Neil Weatherall, head of exchanges at U3A and quiz master; Sylvanna Escanapiego, secretary of the U3A; and Aloys Kolbeck vice president of Euroclub, in addition to the faculty team participating in the project.

The Councilor for International Relations expressed support for the program and thanked the collaboration of all those who have made the initiative's success possible. Enric Gil and Neil Weatherall reviewed the activities carried out during these 10 years, highlighting that 1.600 people have registered in the program and 3.300 people have participated in one of the most successful activities, the pub quiz, which since May 2011 has been held 38 times, with an average participation of 90 people per session. Precisely, after the institutional act a quiz was conducted with the participation of all attendees.

The interventions also highlighted the importance of this exchange program as a tool to facilitate the cultural and social integration of the group of foreign residents.

The operation of the program is very simple: there is a database created from the participation forms of interested persons from which the program coordinator looks for suitable people and puts them in contact. They, through conversation meetings, exchange their respective source languages. Participants decide the place, time and frequency of meetings.

Since the project was officially presented in November of 2009, in addition to the conversation meetings, other activities such as guided tours in the historic center and the castle of Dénia, speed chattings (group dynamics with interviewers and interviewees focused on practice) have been developed of the language), bike tours to the Margo de Pego-Oliva natural park, boat trips to Xàbia and return by hiking trail, a flamenco night and theater performances in English and German.

The exchange program is open to all languages, with the most requested foreign language being English, followed by German and French.