The Observatori Marina Alta, CREAMA entity that collects on its website all statistical data about our region and the municipalities that comprise it, launches a new infographic with data referring to the environmental environment with which we live. 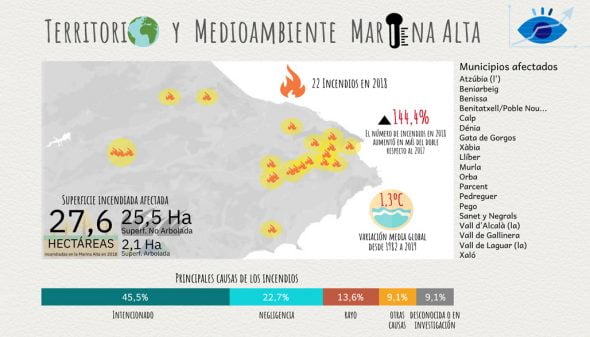 The management and maintenance of our territory as the protection of the environment are fundamental keys in the development of municipalities, this implies an increasing involvement by the citizens in the first instance and by the competent bodies in the management and sustainable administration of their localities There is a growing movement directed towards a sustainable and inclusive local growth that among its different axes stand out policies of conservation and protection of its natural resources. This line highlights the protection and care of our environment; fundamental basis for an intelligent and supportive growth of the transformation of the current model critical to the environment towards protectionism, care and awareness of the natural heritage.

One of the great annual concerns is the number of fires that have occurred. During the 2018 there have been 22 fires in the Marina Alta, of which almost half are caused. Something more than 27 hectares were affected by fires in 2018 according to provisional data from the Ministry of Agriculture, Rural Development, Climate Emergency and Ecological Transition. The most affected municipality has been Dénia (48% of the total area burned in the Region), although in number of outbreaks, Xàbia is the territorial area with the most fires (4). 20 accounts for extinction deposits in the Region from the Ministry.

The fires in the last recorded annual increase more than double in both number and in hectares burned with respect to the 2017. We highlight the great fire (almost 690 ha) of the 2016 in the Cumbres del Sol site located in Poble Nou de Benitatxell.

The consequences of climate change

The effects of climate change are not only perceived on earth, bodies of surface water and seas are also affected. According to the CEAM Foundation (Fundació Center d'Estudis Ambientals del Mediterrani-CEAM), they highlight that in recent decades the surface temperature of the Mediterranean Sea has increased on average 1,3ºC - reaching in some plots an increase of up to 2ºC-. 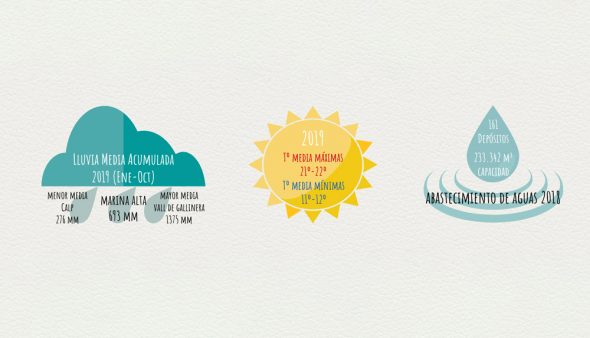 Socks of rain and sun

According to the Survey of Infrastructures and Local Equipments in the Marina Alta, 161 water tanks are identified that provide service to all population centers whose ownership or management may vary. Among them they house a volume of more than 233.000 m3, highlighting the municipality of Calp in terms of greater useful volume stored in its deposits to supply its population centers (in other cases, deposits located in a certain municipality can serve its own municipality as to other adjacent).

In the Marina Alta it is known the landscape richness that agglutinate their localities. Proof of this are the protected landscapes that the Generalitat Valenciana stands out among its figures of protection of natural spaces. Within the 2000 nature network, as the European Ecological Network of biodiversity conservation areas, there are places of community interest and areas of special protection for birds. These areas comprise the largest preserved area, with almost all of the protected area of ​​its 23.000 ha and 21.000 ha respectively. (97% and 89% protected respectively). We are the 4ª region of the province with more protected area with respect to the surface of its territory). 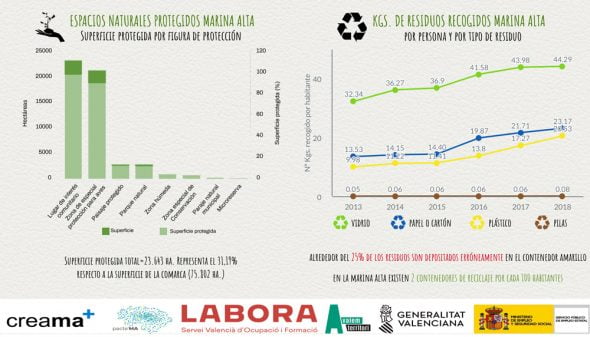 Regarding waste collection, the Survey of Infrastructures and Local Equipment publishes historical series on garbage collection. Taking into account that the 2018 registrations are pending completion, the growing trend of generation and collection of waste, specifically waste deposited in recycling bins, is shown. These values ​​indicate, on the one hand, the annual increase in per capita consumption of recyclable products and also show a greater social awareness for recycling.

More effort from politicians and businessmen is required

Despite the initiatives and good intentions to solve our problems with the natural environment, the reality is that the situation has worsened. Climate change has accelerated and from the political position, companies and scientific collective efforts and resources must be concentrated in defining strategies where the common axis is people and the planet as the center of the economic model, with special focus on people. They must provide solutions towards a sustainable territory or a conscious territory focused on the regeneration of ecosystems and respect for the environment.

This line of action marks one of the fundamental axes of compliance with sustainable development strategies. One proposal is to focus efforts on implementing a circular territorial model where the objective is for the municipality to get as close as possible to the 0 waste, that is, minimize the entry of waste into the different processes / sectors of the municipality, optimize what is already within the system and minimize the number of unusable waste generated. Minimizing the extraction of resources has a positive impact on nature and reduces CO2 emissions.

Last November 25 of 2019, according to the World Meteorological Organization (WMO), the levels of greenhouse gases that trap heat in the atmosphere have reached an unprecedented new record. In the Valencian Community the emissions in 2018 have been almost 9 million tons, these CO2 emissions have been 37% higher than the amount allocated free of charge. Models for climate change will emerge at the recent climate summit held in Madrid. Europe as the first continent to declare the climate alert has countries such as Spain or France that set the goal of reducing CO2 emissions with respect to 1990 by 55% for 2030.