From Manises to Jesús Pobre: ​​the intrahistory of the new emblem of the Dénia Market

The new decoration of the Mercat Municipal de Dénia can now be visited. A huge artisan mural built from 828 hand-painted tiles, with which we can travel to the past, until the 50 years, simply stopping in front of him for a few seconds and observing the great amount of detail. 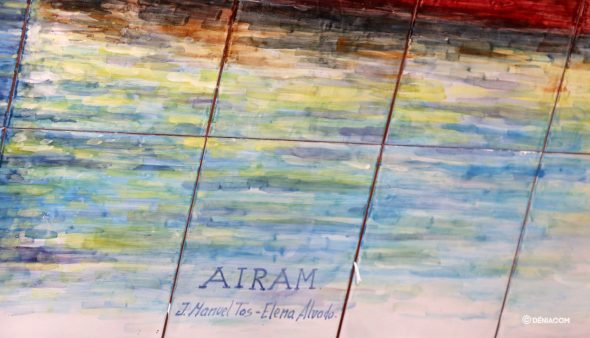 Signature of the mural

First we will see a Dianense port before the current one, rougher, more naked. Quickly, our view is taken by the suggestive castle. But, of course, we always end up looking at It montgó. Now, the mural is much more than that. In front of it you can once again walk through the time, not only with the landscape that we observe but also with the technique that evokes the decade in which the Mercat was opened. Stand in front of a simply white tile and you won't believe it was done in 2019. 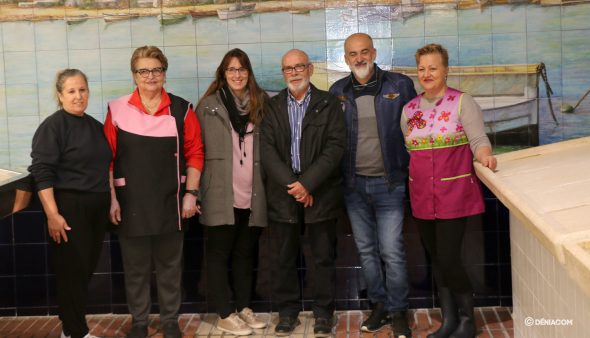 Workers, City Hall and the artist present the work

This magnificent new emblem of the building and, therefore, of the city of Dénia is the work of José Manuel Tos, a natural man from Manises, the capital of the Valencian tile, who has dedicated his life to ceramic decoration. "I did the artistic expertise in the ceramic school, I graduated at 18 years and it has been my vocational work of a lifetime ", says the author. 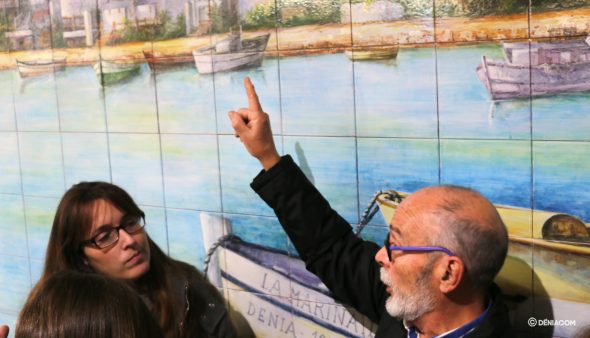 José Manuel Tos explains the details of his work

However, Montgó captivated him and he had to move nearby. "5 years ago I met Jesús Pobre. On the first Sunday of the year 2015 I went to visit the town and I found the little market there, with its very pleasant atmosphere. I decided to move with my lady and I have lived there for 4 years ago". That's where Tos met Javier Scotto, mayor of Jesús Pobre and councilor in Dénia. Apparently, he told the artist that there was a project to make a mural in the area of ​​the fish market. 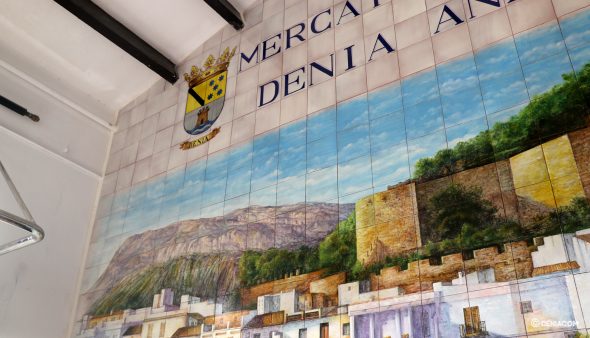 "We were talking about it and we reached an agreement that it should be a representative mural of the time when the market was founded. I thought we should not put fish or figures, which would have been easy, but the fish area being the best was to present something with which people identified with the environment we wanted to capture ", says Cough. In March he presented to the City Council a sketch based on a photo that he was given of the 50 years. Time passed between the papers and the tender, and in May of this year he was granted the execution of the mural.

The mural is made in an artisanal way, as all life has worked according to Tos, except for the bottom part that is a blue, purely industrial socket. The top part has been made entirely by hand. The enamelling used in the white part gives that ancient character far from the industrial white, with which the author seeks to reflect a little more the time presented in the painting. 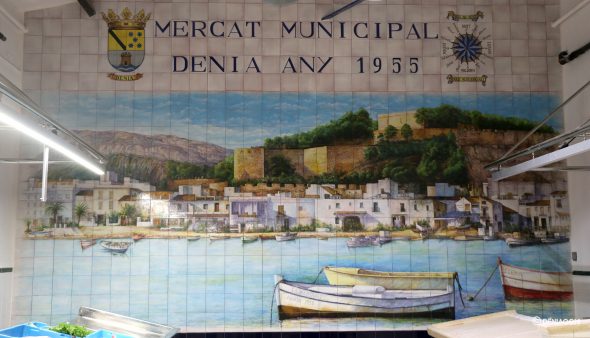 The mural consists of 828 tiles, the bottom with a 80 baseboard centimeters in cobalt blue, on top of this there are 390 tiles that form the panoramic of 20x20, with 2'60 high by 6 meters wide. In total, 390 tiles are the decorated part. In the upper part we find the shield of the City Hall of Dénia, the central motive is the label of the market and the date, and in the right part we have the wind rose that represents very well what is the zone this one. The upper part of the whole is white enamelling. Enameled all by hand, by the hands of José Manuel Tos.

"It is a work of 4 months that I have spent quite nervous until the end, highlighting the nervousness of the 4 days that the placement of the mural has taken us. Because in this mural, like any ceramic, the problem is the assembly. With any mishap a tile is broken and everything is paralyzed to repaint the tile and adjust it to what is around ", admits Tos.

Now, the most savvy eye can find some details that, for many years 50 that it represents, move away from reality. However, everything has a reason. "The photograph they presented to me was in a vertical format and the mural is horizontal, so I had to make small distortions to square it. Javier (Scotto) insisted that the final part of the Montgó appeared, which is impossible with this panoramic, I think I will have taken the Montgó at least one kilometer but, well, we have put it in. Then, the photo was also from quite a distance, so I have resorted a bit to inventiveness. There will be details of the people who lived in that time that will not be as it is because it was impossible for me to do them. I apologize to people who do not feel identified at 100%, but what it was about was to make a panorama that represented the time in which the mural is developed ".

And, of course, he manages to capture it as few in this huge mural that becomes his second largest work in terms of amount of tiles, behind an order of the Bali hotel in Benidorm, so the artist says he has assumed A challenge.

José Manuel Tos says that he will now enjoy the small things, the works in individual bulldogs he sells in the Jesús Pobre market. "I don't know if this will be the one who will retire me from the murals"says Tos. Hopefully not.