The labor market records in the month of August in the Marina Alta have a positive reading, despite the fact that there is a decrease in affiliation compared to July until reaching 55.965 affiliates (-0,84%), we can speak in terms of continuity of signs of recovery in the labor market, since, if we observe its behavior with respect to the months of August of previous years, this decrease compared to the previous month is the lowest in the last five years.

Despite reflecting a total number of affiliates lower than those reached in August of the previous two years, in relative terms we can speak of an improvement in the variations compared to July, thus seeing that the General Scheme decreases compared to last month (- 1,7%), the rest of the affiliation regimes increased, being the Special Agrarian Regime the one that suffered the greatest increase compared to July (+ 14,15%, no such increase has been achieved in the historical series of 10 years analyzed). It is followed by far, the Special Regime of the Sea, whose increase compared to July is 2,18%, and with almost hardly any variation, the Home and Self-Employed regimes (increases of 0,73% and 0,2% respectively) .

This reading changes when we take as a reference the equivalent month of last year, the number of affiliates in August 2019 was 2.871 more than at the end of this month of August (-4,88%). But if we measure the affiliates that have varied in the last 6 months, we can affirm that these increased by 2.254 this just in August compared to February (+ 7,84%). 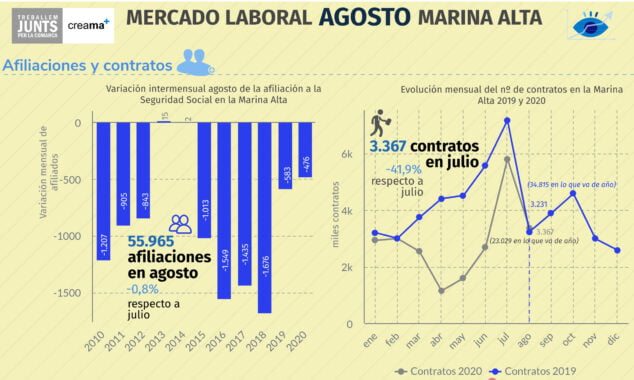 The month of August has always been a peculiar month, in which we know that there are sectors where traditionally the economy of the Marina Alta is greatly energized by activities of a tourist nature and, on the other hand, there are other activities that slow down its rhythm during the month on vacation and therefore reduce their level of employment, it is a month, therefore, where these disparate behaviors are combined.

Regarding registered unemployment, we can say that we have had a relatively good month of August in the region. There has been a slight decrease in the number of unemployed (-0,38%) reaching 11.949 people. It is of standing out,
that since 2014 a better compartment was not observed in this variable, since in that same year the decrease in the unemployed compared to July was -0.72%. Therefore, we are facing an August that, in terms of registered unemployment, in terms of the dynamics of the month, has been positive (the best performance in the last five years).

The stock of unemployed in August is important, because the 11.949 unemployed people reached this August 2020 is much higher than we had a year ago, in fact, in the last 12 months unemployment has grown by 2.689 people. Therefore, we are facing a positive monthly dynamics in the month of August, but with a very negative inter-annual behavior, with unemployment growth of 29% in the last year. 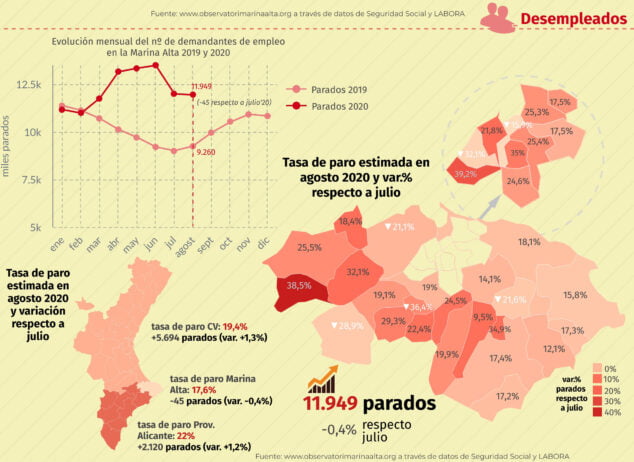 Unemployment data in August 2020 in the Marina Alta

Contracts are a variable that reflects the dynamics of the labor market in the most micro sense, so when an employer sees business opportunities in the short term, he usually increases hiring.

In the month of August, 3.367 contracts were signed in the Marina Alta, which despite a significant decrease compared to the previous month (-41,9%) and recognizing that it is a typical phenomenon of the month of August as a consequence of the concentration of vacations in many sectors during that month and the lower activity they register, in terms of year-on-year dynamics, we are facing a positive behavior, since in the same month of the previous year there were 136 fewer contracts in August, therefore the improvement is of 4,21%. By type of contract, there has been a decrease in permanent contracts, 27,32% fewer contracts have been signed than in August 2019 and yet 8,93% more temporary contracts have been signed than the same month of last year.

At the beginning of the state of alarm, March ended with 51.897 Social Security affiliates, a month later, at the end of April, affiliation dropped to 51.802, affiliation had dropped by 3,55%. In those two months, almost 20% of jobs have been lost (and reaching almost 23% in job losses from February to June), all without taking into account the number of workers received in ERTE. With this outlook, the labor market has begun a slow recovery path. We can say that the data for August are positive and we hope that the macroeconomic context marked by uncertainty will be as short-lived as possible.