Compromís convenes various sectors to draft, together with the public, their program for the municipal authorities

Compromís will hold on December 12, at 19:00 p.m., the first of its open campaign sectors to contribute to the drafting of the 2023 electoral program and the roadmap that the group will follow in the next legislature "bringing together the ideas and contributions of the people we represent, from democracy and bottom-up participation", said Agustí Espí, local secretary. 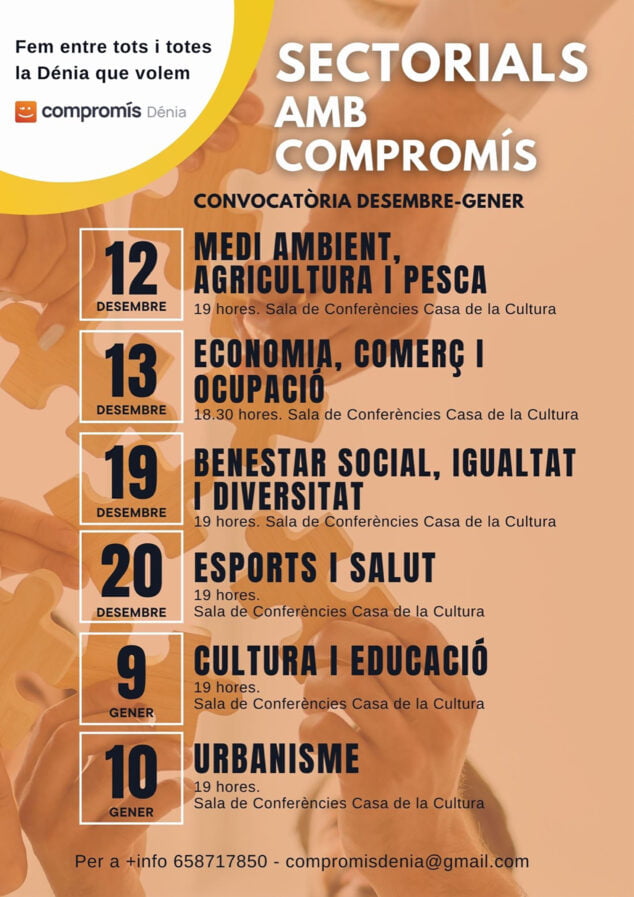 Sectoral programming of Compromís per Dénia

These sessions, open to the public, will be held in two editions. The first between the months of December and January, and the second between February and March. As has been said, the sector meetings are an open space for all citizens, which is why they will be held in the conference room of the Casa de Cultura during the indicated dates. The first one will be dedicated to the Environment, Agriculture and Fisheries, and other related issues, within the framework of Governments with Compromís.

In addition, for the preparation of the program, Compromís will have the experience of coalition positions in the local and regional government, collectives of the territory and experts in various subjects. «From Compromís per Dénia we want to invite and involve the associations dedicated to the respective issues that will be dealt with in the different sectors, to carry out an electoral program that adjusts to the needs and reality of Dénia, from the associative fabric that are the ones that best they pick it up."

Once the first programmatic proposal has been designed, during the months of February and March the second call will begin, where all the proposals and ideas raised in the first edition will be materialized and specified.

From the collective they invite all of society to contribute with "a plural program that can reflect the various sensitivities of the citizens of Dénia, because in this way we will make Dénia a friendly, modern and advanced city, aligned with the SDGs of the Agenda 2030».

Opinion of Compromís per Dénia: "I return with the xacacà of the train"
20 January 2023
Leave a comment