Baleària bets, in Morocco, for the creation of youth employment

The president of Baleària, Adolfo Utor, today received in the Tangier delegation from the shipping company to the commercial mission to Morocco headed by the president of the Generalitat Valenciana Ximo Puig. The event was also attended by the Ambassador of Spain in Morocco, Ricardo Díez-Hochleitner and the General Secretary of Vocational Training of that country, Arafat Atmoun, among other authorities. 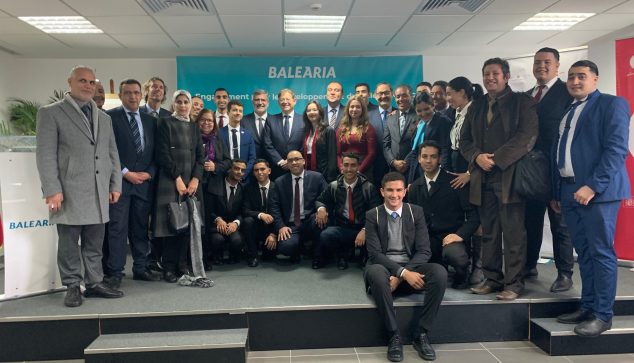 Adolfo Utor has explained the training and employment generation project aimed at students in Morocco that began in October, thanks to a public-private alliance, which improves the employability and employment of 100 young Moroccans, who are trained in trades linked to On board services and you have the opportunity to be hired by the shipping company. Among the institutions participating in the project, the Spanish Agency for International Development Cooperation (AECID) stands out, while Morocco is involved in the Ministry of Education, the Ministry of Tourism and Transportation and the Office of Vocational Training and Promotion of Labor (OFPPT ).

The president of the shipping company has stressed that “Currently 150 employees of Moroccan origin work in Baleària, which represents 10% of the total workforce”, and recalled that it connects Tangier with Algeciras since 2003 and operates between Almeria and Nador since 2017; which is an annual traffic of 800.000 passengers. In addition, he has highlighted the cultural and social links with Morocco where this year he will promote three cultural and social projects at the hands of the Baleària Foundation.

For his part, Ximo Puig, president of the Generalitat Valenciana, has valued the work of Baleària in Morocco and this training program. Puig has pointed out: “Projects like this are essential for young people to acquire the best skills and abilities in order to guarantee their insertion in the labor market”.

So far, 20 students from different areas of Morocco have already completed the first course, of which 15 are already part of the Baleària job bank. A new phase of the project will begin in March, which is expected to be extended until 2021.

A company offers to take care of the pets of doctors, nurses and police
April 03 2020

Lights and shadows in the field: profits in store increase but fall with the hospitality closure
April 03 2020
Leave your comments