Dances against bullying in Dénia schools

Combat bullying through a musical performance that develops a story of bullying a young man from any school. This is the basis of the project. No more bullying. Fight it with art, which the Department of Youth, in collaboration with Education, is bringing to the educational centers of Dénia. 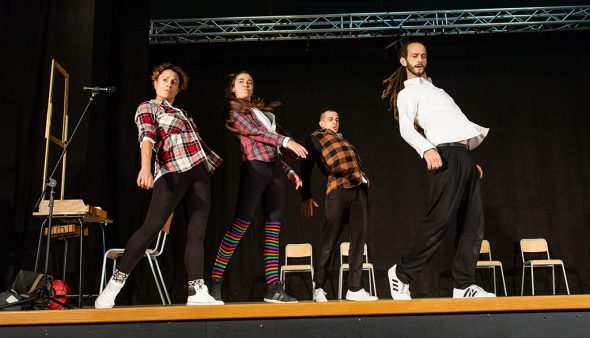 Show no more bullying. Fight it with art

In the musical show (45 minutes long), with music and a voiceover narrator, each character represents a role: the stalker, the victim, who observes the situation without acting, who decides to position himself, who suffered harassment before ... Through dances and a language very close to teenagers and preteens, viewers are placed in real situations that they have been able to live.

Once the musical is finished, the presentation of the actors and actresses includes the story of their real personal stories.

Finally, a dialogue opens with the attendees, to explain how they felt and if they know or have gone through similar situations. The main message, the importance of not shushing and talking with friends, fathers or mothers or teachers, to convince young people that they have the ability to change things from the position each occupies.

Four dancers and a singer participate in this project, as well as a psychologist in the debate and awareness.

No more bullying. Fight it with art He has already visited, during the last week of October, the Cervantes schools, Les Vessanes, Paidos and Llebeig.

In November the musical will be performed at the Pou de la Muntanya, Sacred heart, It montgó and in the three institutes of Dénia, Historian Chabàs, Maria Ibars and Sorts de la Mar.

Each center has chosen the groups that participate in the project, from 3º and 4º of Primary to 1º and 2º of ESO.